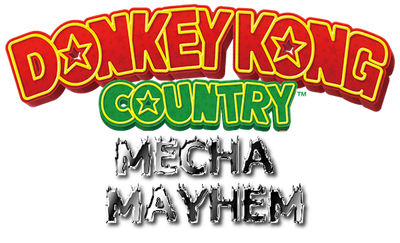 Mecha Mayhem is also the third game in the Returns series, following the original and Tropical Freeze. The main theme around this game is clockwork and steampunk/cuberpunk.

Donkey Kong's 25th birthday, and everyone is gathered. They closed the window this time to make sure no tropical freezes stop them.

Just as Donkey Kong is about to blow out the candle, a giant stomp is heard.

Pretty angry with this, he goes to investigate. There, out of nowhere, was a giant construction montage. Everything was being mechanized, and to make matters worse, his banana hoard was gone.

Before he can go to investigate, he notices a giant Steampunk Dragon out of a cloud of toxic. The dragon swoops towards them, using propellors to blast all the Kongs away.

And just within a few minutes, DK Island becomes an industrial cyberpunk city.

Donkey Kong is the only one who is shown to land somewhere else. After beating up something that was trapping him, he is released, and begins making his way back to DK Island.

The boss of this world is a mechanic golem.

After escaping the outskirts, Donkey Kong makes his way to a mountain-type world, being turned into a resort by the unknown antagonist. Water fountains can push DK off here, and Diddy is primarely used for this world.

In this world, he can unlock Funky Kong and Tiny Kong.

The boss of this world is a mechanical fountain, gaining legs (somehow?!) and using geysers to attack.

In this world, he can unlock Lanky Kong and Chunky Kong.

The MID-BOSS of this world is a mechanical ape, in which the game's first dialogue takes place. The mechanical ape calls itself Mecha Kong. Mecha Kong reveals the antagonist's name, being Aiana. Unfortunately for the Kongs, Mecha Kong was tasked to defeat them. Despite the mechanical Kong not wanting to fight, it claims it was programmed to. It then starts to fight the Kongs.

The boss of this world is Aiana herself, coming in to interrupt the Kong's quest. She claims she is the protagonist, but as we all know, the Kongs thought that was bogus. She then claims to have stolen the Banana Hoard. Cranky Kong, being one of the only Kongs to talk, asks why she would do such a 'stupid thing'.

She then reveals it.

She claims that the timeline in Donkey Kong's world had gotten too predictable. That's when she used a certain someone to reset the timeline, bringing in future characters into past games. This was to keep everyone 'entertained', and that her plan was successful in the end. She tells the Kongs not to worry, for she can reset the timeline again, or so she claims.

Aiana counters Cranky Kong with questions of her own. She questions the disappearance of The First Banana Thief and then questioning why nobody was curious about Donkey Kong having a human in the past.

Fun and games are over, though, as her boss shortly starts after claiming that they've wasted enough of her precious 'inventing time'. Donkey Kong has an angrier battle starting animation.

After defeating Aiana, she simply warped away by clicking gadgets on her wristband. The Kongs make their way to a neon city underwater.

In this world, DK unlocks Kiddy Kong, happy to be reunited with Dixie Kong.

The boss of this world is a mechanic wyvern, taking place above the ocean.

Definitely confused by the name, Donkey Kong steadily steps aboard the pirate ship.

In this world, he unlocks the final member. Donkey Kong Jr.

He meets up with Aiana again in the boss level of this world. She notices how she has to face 10 Kongs. She thought long about this, but then decided to put her inventions to good use. She sees the Kongs off with a 'familiar friend'.

The boss of this world is a mechanized King K. Rool.

The Kongs made it back, the island transformed from a natural paradise to steampunk towers and cities everywhere. He nods to the other Kongs and makes his way towards the first level: Hydraulic Hijinx.

There are no Kongs to unlock in this world.

The Mid-Boss of this world is the steampunk dragon itself from the beginning. It swoops down, and it turns out it has dialogue of it's own. It talks like KAOS, a machine used by Baron K. Roolenstein. It does not reason with the Kongs, calling them 'foolish apes'. It then roars, starting the fight.

Making their way up to the final level, Steampunk Industries, they meet in the office of Aiana, in which it's a wide open area on the top of the tower. She then explains WHY she stole the banana hoard.

It was late at night and sleepy-head Aiana thought it'd be a good experiment to make her industries run on banana fuel. But laughs were not needed, she wouldn't back down her hard work for nothing. The steampunk dragon rises once more. The fight begins.

Aaaand the fight has FOUR phases. Phase 1 consists of the dragon itself. Cranky Kong is the only Kong available for this fight.

Phase 2 takes place inside the dragon, and the Kongs must destroy the Steampunk Heart. Dixie Kong is the only Kong available for this fight.

Phase 3, the dragon rises again, swooping into the air. For obvious reasons, this boss is only possible with Diddy Kong.

Phase 4, reality twists. There is now only a plain background, with clocks surrounding the area. Aiana is in the center clock, seeming to be focusing. Donkey Kong prepares himself for the final battle.

After the Kongs defeat Aiana, she yields and drops a gadget before entering a portal. Confused, the Kongs look at the gadget. It seems to be a 'emergency reverter'.

Donkey Kong presses the gadget, and just like that, tiny gears weave into a mystical pattern. The Kongs amazed, they look outside. There, it seemed like time was reversing. The Island is restored, as if nothing ever happened. And because time was reverted...

It's time to have a BIG birthday bash. 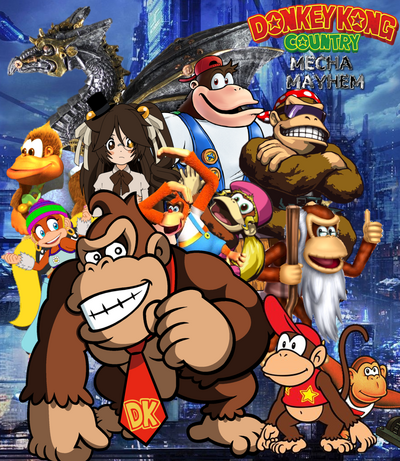 Aiana's full render.
Add a photo to this gallery
Retrieved from "https://fantendo.fandom.com/wiki/Donkey_Kong_Country:_Mecha_Mayhem?oldid=3263220"
Community content is available under CC-BY-SA unless otherwise noted.