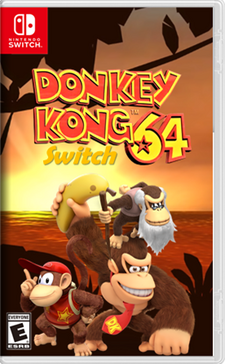 Donkey Kong 64 Switch is a 3D action-adventure platformer game developed by Retro Studios and published by Nintendo for the Nintendo Switch. It is a remake/reboot of the 1999 Nintendo 64 game Donkey Kong 64, bearing some new features on its storyline, gameplay, and graphics.  Unlike in Donkey Kong 64, Tiny Kong , Lanky Kong and Chunky Kong are no longer playable characters as they are all kidnapped in Hideout Helm alongside Dixie Kong and Kiddy Kong, instead Donkey Kong , Diddy Kong and Cranky Kong are the three playable characters that the player uses throughout the game, alongside Funky Kong as a special guide character.

As in Donkey Kong 64, the game is a 3D collectathon where the player controls one of the four available Kongs in open and vast levels similar to those found in Super Mario 64. Their objective in every level is to obtain Golden Bananas among other collectibles. However unlike the original game, the three main charatcers are available from the start while Funky Kong is only a playable character in easy mode. Switching charatcers is also a lot easier and faster as Tag Barrels from the original game are gone and the player can go to the pause menu and switch out any charatcer they choose.

As in the preceeding version, the Kongs are allowed to use and reload weapons of mass destruction, these weapons can be used as power ups to attack enemies, hit certain switches and so on. However since Funky is now a playable character, they are now found in crates instead of being bought at shops. Also like on the N64 game, the Kongs can find Wrinkly Doors are found in certain parts of the levels  (excluding Hideout Helm). As the name suggests, Wrinkly Kong will come out of each door if a Kong approaches it and give the Kong advice on one of their Golden Bananas hidden in each level. The doors are color coded for each Kong; yellow for Donkey Kong, red for Diddy Kong, grey for Cranky Kong and light blue for Funky Kong.

Retrieved from "https://fantendo.fandom.com/wiki/Donkey_Kong_64_Switch?oldid=3249295"
Community content is available under CC-BY-SA unless otherwise noted.