This article has been created by Metal Chaos, the banana Jedi warrior. You have to give permission to edit this article, other wise I will bring out my Flicky army of death! Also this article is fanon, that means it doesn't exists. Continue reading Donkey Kong: Back to Bits, you yellow squared beast!

Donkey Kong: Back to Bits (Also known as Donkey Kong 2 in Japan and Donkey Kong 2: Return to Bits in Europe and Australia) is a 2D platformer for the Nintendo 3DS and Wii U and has been developed and published by Metal Chaos Inc. and Nintendo. The game is the true sequel to the arcade game Donkey Kong and features multiplayer at the same time like New Super Mario Bros. Wii.

Mario, Pauline, and a few Mini Marios are taking a walk. Mario and Pauline plan to have a picnic with a few of Mario's friends. While they were walking to the park, Donkey Kong watched them with binoculars on top of a building. It made Donkey Kong very livid and thought they excluded him in a special event. Donkey Kong hopped off the building and landed in front of Mario, Pauline, and the Mini Marios. DK crushed a Mini Mario while the other 3 screamed "Mama Mia!" and dashed behind Mario as the ape grabbed Pauline and ran away with her. Mario chased after DK while the Mini Marios were depressed and watching the crushed Mini.

After DK fell down into tires, Mario grabbed Pauline's hand and jumped off the platform and the whole tower exploded. Mario and Pauline landed safely on air tires. DK jumped out of the tires and punched Mario, causing Mario to fall back. DK grabbed Pauline again as he dashed to a building and jump on top of it and ran away with Pauline. Mario chased after DK on the sidewalk since he can't jump that high.

DK was almost defeated and just as Mario was thinking to finish him off, dozens of Mini Marios came to attack DK. One Mini Mario came up to DK and touched him lightly, causing DK to fall down. Mario came up to DK and put out his hand, and DK grabbed Mario's hand to get up. "Want to come to the park with us?" Mario asked. Donkey Kong nodded as Mario, DK, Pauline, and the Mini Marios jumped down the building. After 5 minutes, every one invited to Mario's picnic came and started the picnic. 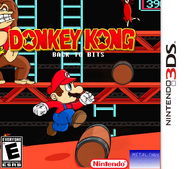 Green Mario
Add a photo to this gallery
Retrieved from "https://fantendo.fandom.com/wiki/Donkey_Kong:_Back_to_Bits?oldid=1631540"
Community content is available under CC-BY-SA unless otherwise noted.