“Get a load of this!”
— Dr. Robotnik's infamous line from Sonic Adventure

Dr. Ivo "Eggman" Robotnik (or simply called Eggman or Robotnik) is the main antagonist in the Sonic the Hedgehog (series). He has appeared in almost every Sonic game to date. He creates robots and machines to destroy Sonic, but his machines are always been destroyed by him. Doctor Eggman wants to take over the world so that Doctor Eggman can establish his own empire where robots and evil scientists can rule.

Dr. Eggman, called Dr. Robotnik in-game, serves as the main antagonist in Sonic's Story of Sonic CD 2. Shortly after the events of Sonic CD, Robotnik still managed to have a fragment of a Time Stone, and used the rest of it's power to harness his newest creation to take over South Island. However, to boost the power of his machine, he needs all 6 Chaos Emeralds.

Dr. Eggman makes a cameo where he flies around with his Egg Mobile, chased by Big and Cream.

Dr. Eggman will appear as one of the villains in Pikachu's Final Destiny 2, along with Bowser.

Dr. Eggman will appear again in this game as a non-playable character. He is one of the main villains in the game, the other being Bowser. They create an evil clone on Sonic named Cinos, brainwash Sonic and his friends, and steal Donkey Kong's banana hoard and Wario's money.

Dr. Eggman appears in the anime, teams up with Bowser and the other villains, trying to take over Earth.

Dr. Eggman and his classic self both make a cameo appearence at the end of the game, humorously getting into an arguement over is Metal Sonic was a good creation or not, who's idea was the best, and which one made the best robots.

Dr. Eggman will appear in Sonic R: Second Run racing in the Second World Grand Prix in his Eggmobile to win the golden trophy.

Doctor Eggman makes an appearance as part of Team Eggman, in which Eggman Nega and Metal Sonic 3.0 rescue him; after 20+ years, his Egg-O-Matic finally decides to pack up, causing him to collide into Gimmick Mountain Zone.

Eggman and Bowser from the Mario series joined forces to rid themselves of their respective enemies, Mario and Sonic the Hedgehog, by genetically modifying Eggman's "robotic" minions and disguising them as Mario and Sonic, leading the two protagonists to believe they are against each other. The two heroes eventually discover this and work together to defeat the two evil-doers. Instead of fighting one another like Eggman and Bowser had wanted, Sonic and Mario began working together to defeat their archenemies and free the world once again. Sonic eventually ends up tagging Bowser with a transmitter which leads both Mario and Sonic to Bowser and Eggman's headquarters in which Princess Peach's Castle was transformed into Bowser's Castle where they are defeated.

In this game he is the main boss of World 2, Angle Island. In phase 1 he plays out like he does Green Hill Zone in Sonic the Hedgehog. During phase 2 his wreaking ball will destroy the two floating platforms used for jumping on him and will instead have to resort to waiting for him to drop to the surface for a chance to land a hit as he is to high up to damage his Egg Mobile with a spin.

In this game he is the main boss of World 2, City Lights Zone. In phase 1 he is sitting in his Egg Mobile shooting bolts and balls of lightning and electricity to the ground. He will also make platforms move. In phase 2 he will drive in his Egg Limo, chasing down the player. The player has knock back shoot missiles that he shoots with a spin attack. However, he must be defeated quickly because the road the boss and the player is on doesn't continue on forever.

In this game he is the main boss of World 1, Green Hill Zone. In phase 1 he fights much like he does in Bridge Zone from the Master System version of Sonic 1 and also with a mix of the Fatty Whale boss from Kirby's Super Star. To damage him, the player has to swallow missiles he shoots. Phase 2 makes him more faster and harder to defeat.

In this game he is the main boss of World 1, Windy Hill Zone. He fights like Super Mario: Dimension Journey but in a 3D environment.

He is a playable character at every Olympics (along with Sonic, Mario and Bowser), starting with Albertville 1992. From Athens 2004 onwards, he is a skill type character. He is referred to as "Dr. Robotnik" from 1992 to 1998 in all versions except Japanese, and "Dr. Eggman" from 2000 onwards.

Dr. Eggman appears as a skill type character and is playable in every event. He is also a villain in the story mode along with Crazy Redd.

He is the main villain of the series. He also has Grounder and Plankton as minions. He is located in his base which is modelled after Scrap Brain Zone. He has his Egg Mobile and a, Egg Limo as vehicles. 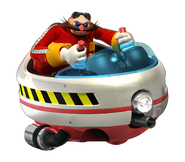 Eggman in his Egg Mobile. 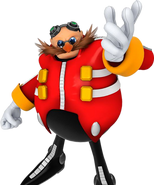 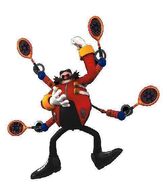 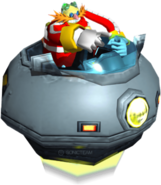 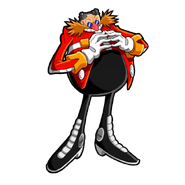 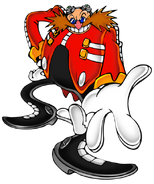 Dr. Robotnik's appearance in the SAT AM series in 3D 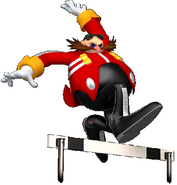 Dr. Eggman in Mario & Sonic at the Rio 2016 Olympic Games 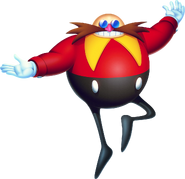 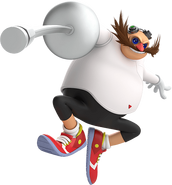