Dixie Kong (ディクシーコング, Dikushī Kongu) appears as a newcomer in Super Smash Bros. V. She is a hidden character in the game.

Dixie is confirmed to have no alternate costume. Dixie is voiced by her voice actor in her games, Kahoru Sasajima.

Dixie Kong in terms of attributes is just a bit slower than Diddy Kong. She’s also just a bit more floaty as well. However, her jump is higher. She can wall cling and jump just like Diddy. She may be slower than Diddy but she’s still faster than other characters. Her hair is a very reliable feature which can be used as a tether, give good grab range, damage opponents, recover, and also reflect projectiles.

Dixie is a lightweight character meaning of course, she dies to attacks earlier than heavier characters. The fact that she’s floaty can also be a negative as her landing is more predictable. Her special, the Orange Grenade which is very powerful can also be used against her as it can be grab by opponents and once do use it, it can affect anyone but them, including Dixie. Dixie is a solid character. She plays very much different from her boyfriend, Diddy Kong, although some regular attacks more or less may be similar.

About the same size as Diddy Kong

SIDE -  Dixie connects her hands while shaking and laughing then claps.

Breaks out of a DK Barrel, and strikes a pose while laughing.

A remix of the various drums and trumpets featured in the “End of Stage". Shared with Diddy and Donkey Kong.

Very identical to that of Diddy Kong’s but she’s slightly hunched over.

Gets on all fours and dashes forward 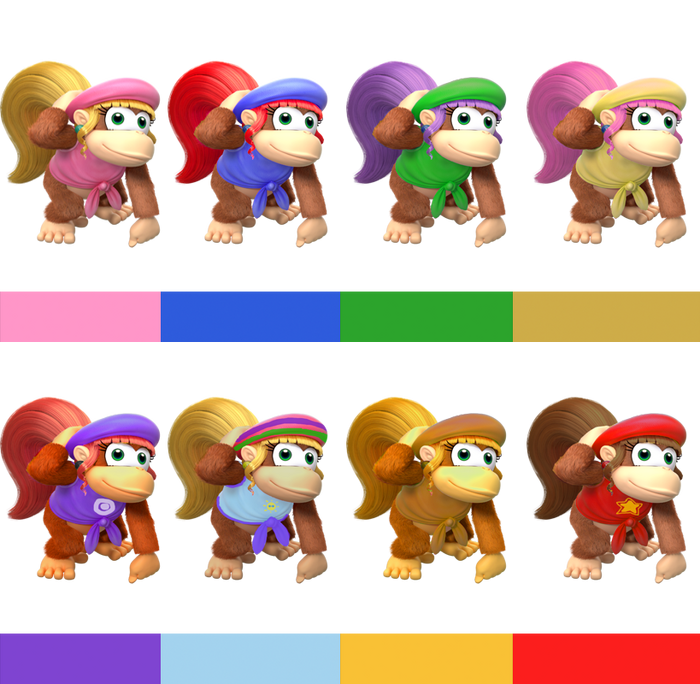