The gameplay within Dissidia U Final Fantasy and Dissidia 3D Final Fantasy remains largely unchanged from it's arcade version. Compared to the previous games in the series, Dissidia Final Fantast and Dissidia 012 Final Fantasy . The general concept is fighting as one of many Final Fantasy characters against similar Final Fantasy characters using a variety of both physical and magical attacks. Players are generally free to move around as they please and can even use magic to levitate themselves from the ground. Dissidia U Final Fantasy and Dissidia 3D Final Fantasy largely employs the same gameplay found within the arcade version which was made from the ground up from it's previous installments. The game features a three-on-three combat feature which involves forming teams. In the case of Single Player, the other two characters are controlled by the computer. The player is able to switch in-between any one of these characters. In regards to Vs. Battles, players can fight against a human player either through splitting the screen in the middle or through the New Nintendo 3D or Wii U Gamepad. In regards to Online matches, up to six players can be involved in a match.

It is important to juggle these two types of attacks together in order to defeat the opponent by reducing the HP Bar to 0 which results in a K.O. When this happens, the teams shared HP is greatly reduced with the removal of one part of the global HP Bar. Decreasing an opponent's Bravery Stat to zero results in a Bravery Break which gives the attack player a significant increase in their Bravery Stat. Bravery Attacks cannot be customized and each character has seven total which includes: three ground attacks, three aerial attacks, and one dashing attack. However, each character can only equip one HP Attack and two EX Skills. Players can save "pre-made characters" to use them in battles.

EX Skills which was previously named "EX Mode" in previous Dissidia Final Fantasy games consists of attacks that increases the players overall battle performance. Only one EX Skill can be equipped to a character at a time. Some of these allow characters freedom while in a powered up form like Terra's Trance while others are Support-based attacks. An EX Burst which involves inputting a command during the EX Skill to perform a powerful combo attack composed of Bravery Attacks and the set HP Attack. Entering into the EX Burst causes the EX Skill to end. After it ends, there is a cool down before either can be activated which represents as a white circle in the HUD display. The bigger circle represents the EX Burst.

Players are capable of moving freely around the map, utilizing both Bravery and HP attacks up close or far away, and numerous other movements. Players are capable of performing a single jump as well as a double jump. Some characters such as Onion Knight and Lightning are capable of a third jump. Characters can also dash and home in onto a select opponent but this uses up a Stamina Gauge and can be sustained only for a small period of time. Dodging is composed of a side-step and grants brief invincibility from attacks. Players can throw up shields to protect themselves from damage but are prone to shattering. Shield deterioration is shown through color indicators with green being the healthiest, orange indicating weakness and red showing danger. When a player targets a another player, it shows a blue link much like from Final Fantasy XII. This also shows up on the map as well. When the targeted enemy begins to attack, it quickly changes to red to warn the player. Players can summon large and powerful creatures from Final Fantasy lore such as Bahamut and Ifrit. They can be summoned through the Summoning Gauge which is filled by attacking the enemy. Crystals represent the ability to call forth these monsters and by grabbing it and having a filled Summon Gauge, they can bring forth their power. Summons alter the appearance of the battlefield both during and 30 second after. Summoned monsters are CPU-controlled allies and cannot be controlled by the players. If the player is hit while calling forth the Summon, it will be interrupted.

Differences between the Arcade and Home Versions

The arcade and home versions of Dissidia Final Fantasy differ in various ways.

Differences between the Wii U and 3DS Versions

As mentioned before, there is some differences between the Wii U and 3DS versions.

Final Fantasy IV After Years
Add a photo to this gallery

Both the Wii U and New Nintendo 3DS versions will contain various game modes for players to explore.

While both the arcade and home versions do not have a plot, the stages represent various areas found within the Final Fantasy franchise. Stages that are released on the arcade version will be generally available on the Wii U and New Nintendo 3DS versions. In addition, future version exclusive stages will also become available that aren't in arcades.

Stages are a common feature in Dissidia Final Fantasy. To date, there are seven total stages with three of them being exclusive to the Wii U and 3DS versions: Kingdom of Padarak is exclusive to the Wii U version while the Crystal Tower is exclusive to the 3DS version. Skyloft is available on both versions. These three stages will be unavailable in the arcade version. Each stage has an Event or transition that happens midway. While some of them are purely aesthetic such as Besaid Island at night time, others draw from their Final Fantasy roots such as Meteofall in Midgar and Destruction of Cocoon in Eden. These events happen midway through the match and may have a hand in changing the flow of battle. 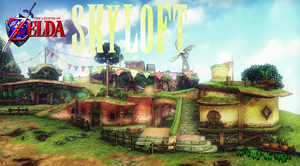 The roster for home versions of Dissidia Final Fantasy greatly reflects that of the arcade version with many of the character appearing in both the Wii U and New Nintendo 3DS versions. Additional characters will be added along with the arcade updates at no extra charge for the consumer. Additional version exclusive characters may be added but there aren't any information regarding which ones will be included. It is confirmed at the time of release, Dissidia U & 3D Final Fantasy will not have the characters Y'shtola and Ramza Beoulve with them being currently arcade exclusive characters.