Start a Wiki
“Impossible! When you reach Splitz castle, he will destroy you himself.”
— Discardil, Super Mario's Split Kingdoms, after his defeat on the Flower Sky-Train


Discardil is one of Splitz's three most loyal minions in Super Mario's Split Kingdoms. Discardil is quite a mysterious creature, who seems to have been rescued by him in his youth. Discardil always calls Splitz "his master" and believes he has an everlasting debt to him. Discardil remains very mysterious though, only being fought twice in the game.

Discardil is a harsh being who obeys Splitz in all he is instructed. So, not surprisingly, tries to defeat Mario at all costs, but alas, he still fails. Discardil is not a very vocal creature, but he still says short quotes.

Being only fought twice, not many of his powers are known, but he can suck Mario into his mouth, similar to Kirby's abilities. He can also control shadows, and while they can't hurt anybody, he can still use these shadows to trick some into being trapped into his oral powers. He also seems to be able to summon a sword out of thin air, which he can then toss at the enemy, and then make the sword disappear, but this move is still very mysterious.

Discardil makes his debut in Super Mario's Split Kingdoms. He is not seen until the cutscene after Mario and friends have boarded the Flower Sky-Train. He is soon fought there and at Splitz's Castle. 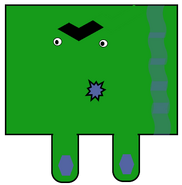 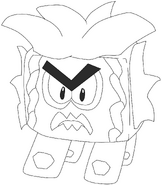 Retrieved from "https://fantendo.fandom.com/wiki/Discardil?oldid=2997705"
Community content is available under CC-BY-SA unless otherwise noted.