Dino Piranha is a recurring boss in the Mario series, appearing in both Super Mario Galaxy and Super Mario Galaxy 2. As his name implies, he is a giant Piranha Plant/dinosaur hybrid, and is hatched after Mario lands on his egg and cracks it. He has a large tail with a club at the end of it, similar to the ankylosaurus, and has yellow petals around his head. He bears a striking resemblance to Petey Piranha.

A stronger variant called Fiery Dino Piranha appears later in the game, and a similar boss called Peewee Piranha appears in Super Mario Galaxy 2. Viridi also mentions Dino Piranha during the Palutena's Guidance dialogue for Piranha Plant in Super Smash Bros. Ultimate; he is referred to in the plural form, implying Dino Piranha may be a species rather than a singular character.

Dino Piranha first appears in Super Mario Galaxy. He is the first boss encountered in Good Egg Galaxy, and is effectively the first boss fought in the game. In the mission "Dino Piranha", Mario lands on his egg, which cracks it, revealing his feet and tail. He will then move around aimlessly, not serving a threat to Mario. He must use a Star Spin on the club on his tail, sending it backward and flying at the shell. This will completely break it, revealing Dino Piranha.

Now enraged, he will pursue Mario, and since he is outside his egg, he can damage him. Dino Piranha will wander aimlessly if Mario is out of sight, but will chase him again if he is close enough. Mario must use a Star Spin on the club again, which sends the tail flying at Dino Piranha's head, damaging him. After being hit once, he turns angry and starts running faster. Hitting him twice more will defeat him, letting Mario get the Power Star he holds.

Dino Piranha is then rematched in Good Egg Galaxy's Prankster Comet mission, "Dino Piranha Speed Run". In this mission, Mario must reach and defeat Dino Piranha within four minutes to get the Power Star.

Dino Piranha, alongside King Kaliente, Major Burrows, Bouldergeist and Fiery Dino Piranha, appears in Super Mario Galaxy 2, all of which are encountered in Boss Blitz Galaxy. In the mission "Throwback Throwdown", they must be defeated one by one to obtain the Power Star. Dino Piranha is the first boss battled, and he uses the same tactics from Super Mario Galaxy. Dino Piranha is also battled in the galaxy's Prankster Comet mission "Throwback Throwdown Speed Run", where he and the rest of the bosses must be defeated within five minutes.

Super Mario: Battle of the Stars

Dino Piranha appears in Super Mario: Battle of the Stars as an unlockable playable character.

Dino Piranha appears in Mario Baseball: Home Run as a playable character. He is a sidekick on Rosalina's team, the Rosalina Stargazers. He has a very high batting stat, but is generally poor everywhere else.

He has a fielding ability called Piranha Catch, which allows him to catch balls with his mouth from farther away than the standard dive. 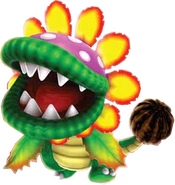