“Master of dimensions... Pleaser of crowds... I am... Dimentio!”
— Dimentio, Super Paper Mario

Dimentio is a jester and the main antagonist in his debut Super Paper Mario. Like Mario and Mimi, he can flip between dimensions, but he can also manipulate them (an ability he shares with Merloo) and controls Dimension D, which he designed. Skilled in duplication, teleportation, and invisibility, Dimentio is one of the four main minions of Count Bleck, along with O'Chunks, Mimi, and Nastasia. However, over the course of the game, Dimentio eventually reveals himself to be the true main antagonist, using his "master" merely as a way to further his plans to obtain the Chaos Heart and use its power for his own agenda.

Dimentio, being a magician, is capable of many special abilities and powers. Being a master of dimensions, Dimentio is able to flip between them like Mario. Dimentio can also create his own in which he controls, such as Dimension D, and give himself additional power and support in these dimentions.

Dimentio can teleport and shoot energy spheres at his foes. He can also clone himself to inflict twice the damage. A method which proves to be the most effective is his magic. He is able to create a compact magic field around his victims in which he simply snaps his fingers, which causes several explosions within the field. Dimentio's 'Warp', used by nearly all the villains at some point, also has its own distinctive appearance and sound. A square expands then contracts on the teleporting object, making it disappear with a sound while a small shock-wave distorts the air around it.

Dimentio's lesser abilities, usually used for acquiring information, are hovering and being able to turn invisible. Dimentio seemingly never walks during any point in the game.

Dimentio is also the main character in Super Paper Dimentio. It is about Dimentio attempting to take over Flipside and the Mushroom Kingdom.

In Neverworld, Dimentio helps form The Chess Crew. He is decapitated by Riku and resurrected by the Neverworlder to be merged with Luigi and King Boo to form The Pied Piper.

Dimention is a player on the Bowser Villains team on the multiplayer Wii sports game Mario Rugby League. He is a skillful character with good speed but poor strength. His special skill is to flip around any foes coming towards him, this avoids tackling.

Dimentio appears as one of the final characters to come to Mimin Island in Captain Rainbow 2. His dream is to destroy all worlds. If the player grants his wish, all the globes across Earth will vanish, and Dimentio will end up annoyed.

Dimentio appears in Hellfire Fighters 2: Dawn of Cipher as Bill Cipher's closest minion. He later betrays him, and abducts Bill's powers to turn into Dimented Cipher.

Dimentio makes about as large of a role here as he did in Super Paper Mario. The only differences are that he is truly loyal to his leader, Hero, and that he has new abilities. He guards the Blue Heart Crystal needed to access the Hero Dimension. He re-battles the Bros. in Hero's World with tripled stats. Unlike in other games, he actually becomes good in the Good Ending and the True & Best Ending, along with the rest of Hero and his minions. Dimentio is adopted by Bowser to be with him and the Koopalings in the Best and True Ending. He also appears in the sequel as a kidnapped person in the fifth world, preceding H.D. and succeeding A.D.

Lakithunder is a playable character in the Koopa Kart series as of Koopa Kart Wii. He is a middleweight driver in every game he appears in. He features boosts in Weight, Off-Road, and Mini-Turbo.

Prior to the due, Dimentio committed an unknown crime and was locked away in the Galactic Federation Maximum Security Prison. However, he escaped in a breakout, and at the end of the film, he collects Shadow Mario's powers, and teleports to an unknown location.

Having taken place a year after the events of Super Paper Mario, Dimentio was mentioned several times throughout the story, but has not made an appearance. However, two look-alikes by the names of Dimentia and Dimention are in the story, which are connected to him in some way. In this story, it was explicitly stated that Dimentio, along with the aforementioned Dimentia and Dimention, were part of the Dimén clan, which consisted of other dimension-bending jesters. With Dimentio's (apparent) death at the hands of Mario, Peach, and Bowser, it was assumed that Dimentia and Dimention are two of the last remaining members. According to Dimention in the eleventh chapter, Dimentio, at some point, had been exiled from the Dimén clan for his "scheming ways". As such, neither Dimentia and Dimention think very highly of Dimentio, and have been shown to dislike being compared to him (with the former calling him a "creep", and the latter calling him "scum" and a "disgrace"). 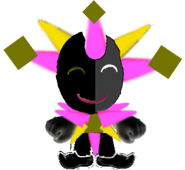 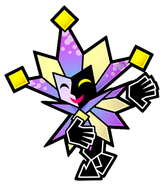 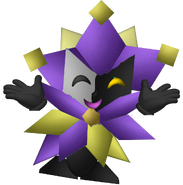 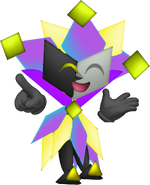 Dimentio as he is in Lovers In War
Community content is available under CC-BY-SA unless otherwise noted.
Advertisement