“...The dream was better than the reality...Reality can never live up to a fantasy so divine...”
— Initial quote


Dimensional Destruction is a crossover video game, including many elements from different video gaming genres (such as: Fighting, Hack and Slash, Strategy, Simulation, Role-Playing, and many others), which focuses on a large range of Bleak Moonlight's (t∣b∣c) characters, as an intergalactic threat seeks to destroy everyone and everything in it's path. It serves as the first official title in both the Bleakverse and Illusionverse, and the beginning to a large and interwining story between the two universes and the New Fantendoverse, albeit to a lesser degree.

The game also holds many references to other video games and forms of media, including game play emements and game modes, to help reiterate the overall theme of the game, dimensions. The game will also feature original content, naturally. The game has been developed by Bleak Industries in collaboration with other companies like Square Enix, Electronic Arts and Blizzard Entertainment.

For the time being, it has been rated "T" for Teen by ESRB, and "16" by PEGI, however this is subject to change when the final build of the game is presented to the rating boards. While the release date has been expressed as simply 2017, it is anticipated to be released during either Q1 or Q2 of 2017. It is being planned to be released exclusively on the Bleakbox for a month, before being available on the PlayStation 4, Xbox One and Nintendo Switch. A slightly toned down version of the game is also planned to be released onto iOS and Android devices sometime after launch.

The story of Dimensional Destruction focuses on the overlapping of different universes and dimensions, which causes distress for a lot of the heroes.  After being split from all of her known friends, Liana meets a strange girl named Parvati, who seems to have suffered some form of Amnesia from the dimension split. The two decide that they need to figure out how this all happened, and put a stop to it.

Spoiler warning: All content here is revealed during the Darkest Days storyline, so make sure to read that before you read the synopsis of events posted here.

Liana has a strange nightmare again of a girl with pink hair, and struggles to sleep. The next day, to her surprise, she meets the girl that she's been having nightmares about. They introduce themselves to each other and get along reasonably well. Sometime after, Liana is greeted by Vermilion as she explains that she needs a troop of fighters to battle against Grieve.

After co-operating, Liana is introduced to the other fighters included, which included Ryoko. They then meet the Shrine, a group of heroes fighting against evil, outside of the building where Grieve is stationed. When they reach Grieve, he somehow manipulates Syron and activates his Dimensional Destroying device, as well as opening a portal to escape. The fighters all charge into the portal, except Liana who is tripped and falls asleep.

Dimensional Destruction's main game play is heavily inspired from the Fire Emblem series, among other turn-based strategy war video games. The game features you travelling across an interactive world map, which changes depending on environmental factors and developments within the game (for example, if a bridge is destroyed during a level then you lose your way of accessing maps on the other side of the bridge). The maps are designed around different environments and conditions, which can make every map unique and equally as challenging to the player. To progress in the game, you fight against varied opponents - raging in difficulty and speciality - and ultimately recruit new fighters.

Despite the game's story following a linear path to draw a canonical conclusion, there are many different branches of stories you can explore in the game to add more variety and depth to the characters in your team. Although, when the main story is finished, you may replay older levels and see what would've happened if other conditions were to have happened (for example if a specific character died early on), and you can play alternate levels which take place in an alternative universe to the canon of the game.

The playable characters in the game harbour a mobile phone, which unlocks a lot of features for the player. It's main function in the story is to communicate with characters via text or call. It is also the gateway to use online functions in the game.

In Dimensional Destruction, there are two main attack methods which characters can use, weapons and abilities. There are hundreds of weapons which can be utilised by characters - such as, Swords, Hammers, Tomes, etc. - which can lead to some really unique combinations. Every weapon in the game has a zodiac attached to it, which can be manipulated and enhanced by characters that have matching zodiac signs, such as allowing characters to dodge attacks more easily, or increasing their attack compatibility and dealing more damage.

In rare cases, some characters may have exclusive weapons which only they can use, which often means that the character has a signature weapon outside of the game which they own. They are one of two ways of attacking opponents in the game, the other being exclusive Rift Breakers.

In the game, every character has two-four abilities called Rift Breakers. Upon filling up a gauge - which is filled through attacking other units, or doing an action as a unit during the turn - they will be able to unleash a Rift Breaker, depending on how full the gauge is. The first Rift Breaker is unlocked by default when the character joins your team, however further Rift Breakers are unlocked through specific processes or progression in the game.

Star Signs are another mechanic in the game, which also play a major role in the story, Darkest Days. Star Signs are specific signs that are matched to somebody based on their birth date. Every playable character in the game has a star sign, using the traditional alignments made by NASA. Similar to how type effectiveness works in series like Pokemon, damage will be increased or decreased by a set percentage based on the star sign arrangements of both fighters. If characters that are partnered together have the same star sign, they also receive a slight increase to all their stats.

The Friendship meter is another mechanic in the game which affects combat. Characters will work better alongside other units which they are friends with, which you can see in the character profiles section of the menu. If a character gets along with another character which they are fighting alongside, then they will find it easier to protect each other from damage and to attack in coordination. However, if they don't get along, they will be less willing to protect each other from enemy damage and will not work together effectively.

Similarly to other Illusion Works properties, Dimensional Destruction also features a completely original cinematic story mode, titled Darkest Days, while incorporating the role-playing and fighting game play elements. Darkest Days will predominantly focus on all of the characters involved with the Ziama Prime universe (as well as some Guest Characters from other creators and franchises), as their world becomes more and more threatened by an unknown enemy. A lot of different stories for the characters will merge and intertwine in this story, making it to be the most dynamic and dramatic in the Ziama Prime timeline to date.

There are currently an unknown number of characters planned for the game, although 57 have been revealed so far. You can click on their image to be taken to their page! (If it exists)

As expected, a soundtrack was composed for Dimensional Destruction. It was created by Roulette Records for the game, with all the tracks fitting the feel of the game. The soundtrack is mainly composed of rock and alternative music, with a couple of electronic tracks involved as well. One of Roulette Records' artists, Bleak Moon, helped with the production of an original song for the game titled "Darker Than Night", which was also released as a promotional single for their upcoming fourth studio album.

Unavailable as of yet, due to the game being incomplete. 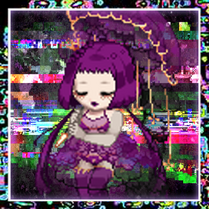 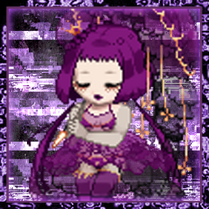 Initial teaser for the game. 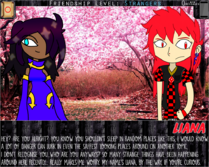 Screenshot from Chapter 04
Add a photo to this gallery

Retrieved from "https://fantendo.fandom.com/wiki/Dimensional_Destruction?oldid=3012551"
Community content is available under CC-BY-SA unless otherwise noted.