Diggersby is a bipedal Pokémon resembling a large, portly rabbit. Its most remarkable features are its two ears, which are each crowned with a massive, muscular forearm, complete with three-fingered paws. The ears are furry and mostly grey in coloration, with a pink inner pinna, whereas the paws at the ends of the ears are brown. Three spots of brown fur surround each of the ear-wrists. A pointed protrusion marks the outer elbow, hinting at the presence of bones inside the ear-forearms. These ears are strong enough to lift objects weighing over a ton and prove to be an invaluable asset in Diggersby's digging.

The other four limbs growing from Diggersby's round, grey torso are small in comparison to the ears. The fur of the upper paws is white, while the feet are brown. A sash-like band composed of thicker, wooly fur surrounds its waist, where it tends to tuck its paws in. This sash is sectioned brown on its sides and yellow at its front and back; its short tail is also yellow, protruding from the back section of the sash. Diggersby's face is dominated by a large brown muzzle, resembling stubble. Two large front teeth protrude from its wide mouth and three whiskers decorate each cheek. Its eyes are perpetually squinting and it seems to favor a slightly furrowed brow. 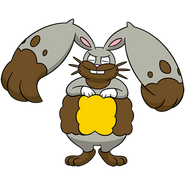 Dream World Artwork
Add a photo to this gallery
Retrieved from "https://fantendo.fandom.com/wiki/Diggersby?oldid=3202881"
Community content is available under CC-BY-SA unless otherwise noted.