Digga-Leg is a recurring boss in the Mario series, first appearing in Super Mario Galaxy 2. It strongly resembles Megaleg from Super Mario Galaxy, although it is significantly smaller and has two legs instead of three. Its weak point is also on its underbelly rather than on top of its head, and its battle tactics are slightly different.

Digga-Leg first appears in Super Mario Galaxy 2 as a boss. It is encountered in Spin-Dig Galaxy during the mission "Digga-Leg's Planet". When Mario lands on its planet, it slowly activates and blows steam from its Snifit-like nose, starting the battle.

In order to damage Digga-Leg, Mario must use the Spin Drill to dig through the dirt planet and strike its glass underside. However, he cannot hit its feet or the top of its head, as he will instead rebound back to his original position. Throughout the battle, Digga-Leg will jump around the planet, and can knock Mario away with its feet. It can also summon Diggas by flipping its head upside-down and releasing them into the dirt, which will them move around the planet and damage Mario if he hits them. After its glass underside is hit three times, Digga-Leg will be destroyed, and Mario can retrieve the Power Star it held inside it.

Digga-Leg is then rematched in Spin-Dig Galaxy's Prankster Comet mission, "Digga-Leg's Daredevil Run". The battle is virtually unchanged, though Mario must not take damage, lest he loses a life instantly. Defeating Digga-Leg again grants Mario another Power Star. 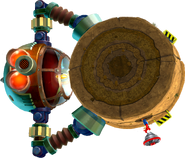 Digga-Leg in Super Mario Galaxy 2
Add a photo to this gallery
Retrieved from "https://fantendo.fandom.com/wiki/Digga-Leg?oldid=3130355"
Community content is available under CC-BY-SA unless otherwise noted.