“Be sure you get only the best of the best supplies from the Kingdoms. This party must be perfect!”
— Diamond

Diamond is a rich, Underworlder girl that appears as a major character in The Rescue Squad: Birthday Blitz. She serves as the main antagonist of the game, sending the Party Planners throughout the neighboring Kingdoms to get the best supplies for her upcoming birthday party.

Diamond resembles a small girl. Much like other Underwolders, she has light-gray skin and crystalized hair, with hers being light blue. She also has light-blue eyes and mouth. She also has small bits of light-blue crystals on her hands.

Diamond can often be seen as persnickety, snooty, and arrogant. She takes great pride in her family's fortune, often spending money on pointless items such as new shoes and a new tiara. This has led her to becoming spoiled, leading to temper tantrums over the simplest and most miniscule things. In spite of this though, Diamond is not necessarily a bad person; she doesn't go out of her way to berate those who have less of a fortune than she does, and in some cases is even accepting of them.

Diamond makes her debut in The Rescue Squad: Birthday Blitz as the central antagonist. She is first seen telling the Party Planners to travel across the Kingdoms and collect all the essential items to make the perfect birthday party. Toad, Toadette, Bowser Jr., and Waluigi see this as a challenge and race to the Kingdoms to get these items before the Party Planners, delivering them back to Pearl so she can have a better birthday party.

Diamond makes her first playable appearance in Mario Kart: Speedway Rush! as a lightweight character, having good acceleration and handling, but low top speed and weight. She is automatically unlocked if one has a save file of Super Mario and the Underworld Trials on their Nintendo Switch, but can otherwise be unlocked by playing 1000 races total. Her partner is Sarina.

Diamond makes a minor appearance in Paper Mario: Double-Sided. She appears in an alternate reality in the Underworld in Bowser's first chapter, where Ruby never existed and Obsidia was able to take over. Rather than being a rich, snooty, and arrogant, she's portrayed as a kind, but timid freedom fighter, running a village home to several Underworlder refugees. In the game, she explains to Bowser that Obsidia's rule has grown stronger with the portals appearing, with Bowser storming off to find her. She is later seen when Obsidia is crushed by her castle, cheering with several other Underworlders that they are free from Obsidia's rule.

Diamond and Kyu T. dressed as each other, art by Samtendo09 (t∣b∣c) 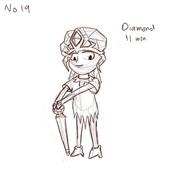 Retrieved from "https://fantendo.fandom.com/wiki/Diamond?oldid=2992730"
Community content is available under CC-BY-SA unless otherwise noted.