View source
“I have fought darkness himself, that unholy beast. But I have died with honor in a battle without honor.”
— Dhuwor to Yoshi about Usura Yoshi

Dhuwor was an ancient prince of the Koopas. He was strong, wise and a warrior birth. When Usura Yoshi came, the prince was destroyed. His body was later thrown in the sea. It is known that he loved a human named Maril.

Dhuwor was an great prince of the Koopas. He has green hair. He lived a comfortable live as prince. He wields the black blade and painted a small part of his head red for the victories he has made. He was, that day, the best warrior of all. He cared for his family and friends. When he met Maril It was the best time of his life. His dad hated that he loved a human but he didn't care. He was also very tactical warrior knowing of war and he knew the enemy better than anyone.

With the coming of the dark Usura Yoshi, the prince was the first line of defense. The strongest warriors joined him in facing their enemy but Usura Yoshi was more tactical in batttle. Slowly he not only defeated their Koopas but easily also slayed together warriors throwing most of them in the lava. When he stood for the prince throwed his own blade away to face a fair battle, and Usura Yoshi agreed. When the battle was halfway done Dark Yoshi knew that he wasn't stronger. Usura Yoshi cheated Dhuwor, picked Dhuwors blade and killed him. Dhuwors was killed with his own blade when in was thrown from the castle in the sea.

In Yoshi's Island: From the Beginning, Dhuwor can be seen as a ghost. He will say that the battle with Usura Yoshi was the best moment of his life, and that he died with honor in a honorless battle. Later he will be a mini-boss with his normal appearance but still a ghost. It will take a lot time before he is defeated. 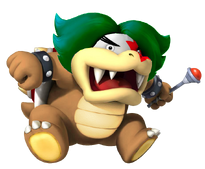 Prince of the greatness and lord of honor 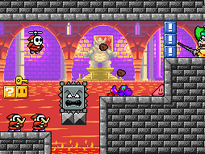 Dhuwor in Rpg
Community content is available under CC-BY-SA unless otherwise noted.
Advertisement