Dharkon (ダーズ, Darz) is 1 of the main antagonists of Super Smash Bros. Ultimate's World of Light story mode. A mysterious deity, not much is known about this character beyond their great power, which is equal to Galeem's. It can clone endlessly from the bodies it collects. The second act of World of Light seems to suggest that Galeem was keeping back Dharkon, as their defeat leads to Dharkon emerging and attacking, the world falling into his dark control.

Dharkon is a representation of darkness as opposed to Galeem and the two are at war with each other in the last third of the World of Light mode. Representing the power of darkness, Dharkon uses it's hollow versions of Nintendo heroes and villains to fight against Galeem's more lighter cast of Nintendo characters. Only by defeating both can a true form of light be achieved.

Dharkon appears as a collection of dark, spindly tendrils with razor sharp pink "claws" weaving around a blue and green eyeball. Like Galeem, they are quite the abstract being. The eye is Dharkon's weakspot and perhaps it's primary body, as it is the only thing that stays around when it is stunned.

After Kirby rescues many of the fighters in the Light Realm and faces Galeem with the fighters, Dharkon attacks and creates a shattered portal into the Dark Realm. Galeem flees from the scene and is not seen again until Dharkon is defeated, where it proceeds to counter attack and leads to the creation of the Light and Dark Realm, a battleground of both forces. After freeing the final fighters and defeating the final spirits, the player has a choice to defeat Galeem or Dharkon.

Galeem and Dharkon join forces to stop the player from accomplishing this task, attacking them as they make their way up the platforms towards the final destination. They also send a variety of False Characters to attack the player as well. However, Galeem and Dharkon are still opposed to each other, and will fight each other to the bitter end. As the player fights both of them, they will attack each other when they are open and the player can get caught in the crossfire. When both are defeated, all of the Spirits are released into a spire and the world is restored back to it's original form. Their bodies fall into the ocean.

Dharkon appears in Nintendo All-Stars Chess as a Hero Piece, which are chess pieces with special movements. Dharkon can only move diagonally twice per turn. At the start of a turn, any pieces next to Dharkon are considered captured, just like Galeem's Hero Piece.

Dharkon has many of the same abilities as Galeem for the most part in that they are able to use Spirits to create clones of character imbued with the spirits of other characters and use them as part of their army. They were also shown to possess the main body of Crazy Hand and could create millions of clones of him similar to Galeem's Master Hand army. Dharkon also seems to have stolen the spirits of Galeem, although it is somewhat ambiguous as to what Dharkon took from Galeem. He can also create False Characters with his own visual touch.

Dharkon's unique abilities come in the form of corruption and his tendrils. His tendrils are able to wrap around, strike and extend to absurd lengths. In "Defeat Galeem" ending, he was shown killing Galeem by piercing his body with his tendrils. He can also use them in a drill like way to destroy platforms and hit the player character. He can also create X-Bomb-like explosives that blow off in X-shaped patterns. 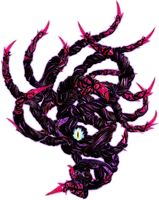 Dharkon's portrait for his boss fight

Dharkon emerges forth with an army of Crazy Hands 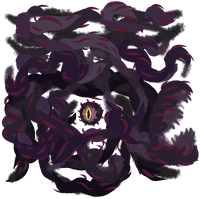 Dharkon as he appears in Super Smash Bros. Great Fray 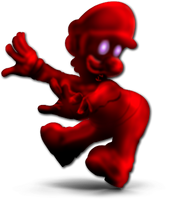 Dharkon's False Fighters (Luigi)
Add a photo to this gallery

Retrieved from "https://fantendo.fandom.com/wiki/Dharkon?oldid=3236885"
Community content is available under CC-BY-SA unless otherwise noted.