Dexter is the main protagonist of Cartoon Network's 90s/2000s TV series, Dexter's Laboratoratory. He is a child prodigy who works in a secret lab, but no one knows this except for his sister Dee Dee, whose curiosity always interrupts his experiments.

Dexter makes his first Vicinity Saga appearance in the 2015 video game, Cartoon Network: Legacy, the first Vicinity-related game. His family is invited to meet Professor Utonium and the Powerpuff Girls at the start of the game. He soon develops a crush on Blossom, the leader of the girls. They have to team up with several heroes from all over the Tooniverse to defeat a rising interdimensional threat known as Virus.

Dexter appears in The Mysterious Five Project as an unlockable character. In Irregular Show, he is a major character, working with Tony Stark to find out what's up with Irregular, a weird force that tears apart worlds and recreates them in its own images. 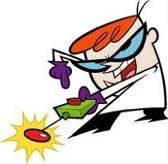 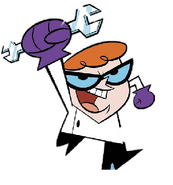 Retrieved from "https://fantendo.fandom.com/wiki/Dexter?oldid=2639213"
Community content is available under CC-BY-SA unless otherwise noted.