Dewgong (Japanese: ジュゴン Jugon) is a dual-type Water/Ice Pokémon. It evolves from Seel starting at level 34.

Dewgong is a pinniped Pokémon resembling a sea lion. It has a snowy white, furry body, which renders it virtually invisible in snowy conditions. Its face has two black eyes with no visible sclera, a black button nose and two tusks extending from its upper jaw. It has a streamlined body with two front flippers and a long flowing tail. Even in extremely cold and ice-packed waters, its tail allows it to be a swift and agile swimmer at speeds of 8 knots. On top of its head is a sharp horn, which allows it to cut and plow through even the thickest of ice floes.

It lives on icebergs adrift in frigid ocean waters, as well as glaciers on land. It thrives in lower temperatures, becoming increasingly more active the colder the weather gets. By storing thermal energy within its body, it is completely unharmed by even the most intense freezing weather. During daylight hours, it sleeps on bitterly cold ice or under shallow water. However, at night when the temperature drops, it becomes a hunter and searches for prey.

Dewgong is based on the aquatic dwelling tropical mammal, the dugong. Its is of the same order as the manatee, which resides in the Western Hemisphere. The four known living members of the order all currently inhabit warm waters, a source of conflict with Dewgong's Ice-type affinity. However, an extinct closer evolutionary relative from the same family (Dugongidae), the Steller's Sea Cow, once existed in the cold Arctic waters of the Bering Sea. While it is suggested that Dewgong was partially inspired by other water dwelling aquatic polar mammals; seals, sea lions, the Harp Seal, the Hooded Seal, the ringed seal, et al.; the Sirenian fossil record suggests the prominence of enlarged incisors that are absent in the modern variants of the dugong, a feature that is noticeable in Dewgong.

Dewgong is a portmanteau of dew and dugong (a relative of the manatee). Dew may refer to the natural phenomenon of water vapor condensing in the presence of a cold surface. Dew formation at sufficiently low temperatures turns into frost, a possible reference to Dewgong's dual type affinity.

Jugon is a corruption of dugong. 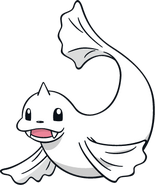 Generation VI
Add a photo to this gallery
Retrieved from "https://fantendo.fandom.com/wiki/Dewgong?oldid=2147564"
Community content is available under CC-BY-SA unless otherwise noted.