While it is not known to evolve into or from any other Pokémon, it has three other Formes. In Generation III, its Forme depends on which game cartridge it is on and cannot be changed without trading.

In later generations, its Forme can be changed at will in Veilstone City, Route 3, Nacrene City, Ambrette Town, or Fallarbor Town.

Deoxys is an alien-like bipedal Pokémon that has four formes, each focused on a different stat. The main components that are constant for all four formes are a dominant reddish orange color, a bluish-green face, and bluish-green three dots on its back arranged in a triangle. Typically, there is a purple stripe running down the center of its face and a purple, crystalline organ in its chest. Its white, circular eyes are set inside rectangular, black eye sockets. It is shown in the anime, that Deoxys may have a green crystalline organ and facial stripe.

In its Normal Forme, Deoxys has tapering legs with a segmented, vertical, blue stripe on the upper portion. The abdomen is black with vertical lines, while the majority of its skin is reddish-orange. The arms are capable of taking different forms, usually a pair of tentacles coiled in a double helix. One tentacle is the primarily skin color, while the other is light blue. Alternately, it can form more humanoid arms with a red top and blue underside and a five-fingered hand. This forme has a blunt protrusion with a single blue stripe on either side of its head and stubby tail.

While in its Attack Forme, its legs remain tapered. However, its blue stripes are no longer segmented and run the entire length of the leg and there is now a large spike on the knee. Two pairs of whip-like tentacles with pointed tips, one reddish-orange and one blue, replace its previous coiled, blunted tentacles. The protrusion on its head are now triangular with an additional one extending for the top of its head. Most of its reddish-orange skin has receded, revealing a striated, black chest and abdomen. Finally, its tail is now longer and more pointed.

Deoxys's Defense Forme has bulky, wide legs that are somewhat flat at the end with a bluish-green spot on each knee. It retains its two pairs of red and blue tentacles, but they are now flat and broad. The head has fused with its body and all protrusion are gone, causing it to resemble a helmet. The reddish-orange skin now covers the entire body, so none of its inner black portion is visible. There is now a single blue stripe on each shoulder, and its tail has disappeared.

The Speed Forme of this Pokémon has a sleek black body with thin striation. The reddish-orange skin now covers only its head, hip joints, and the area around its crystal. There is now only one tentacle on each side of its body, one red and one blue. The protrusions on its head now point upward and the back of its head now forms a long spike. There is a long, thick blue stripe running down the center of this longer protrusion. More blue stripes appear on either hip joint and on its legs.

Deoxys was formed by the mutation of a virus from space. The Pokémon is highly intelligent; its brain appears to be the crystal in its chest. This organ is capable of firing laser beams. Additionally, Deoxys can use psychokinetic powers, which are useful for its signature move Psycho Boost. As shown in the anime, it is able to regenerate any part of its body that it may have lost during a battle. It has also demonstrated the ability to create an aurora without changing its forme. These auroras can have different wavelengths and are used to communicate with other Deoxys. This Pokémon came from outer space from inside of a meteor. In the anime and manga, Deoxys has been observed to create clones of itself. These clones have lifeless eyes and duller color, lack of the trademark crystal on the chest, and seem to be unable to change from the Normal Forme. Furthermore, they seem unable to morph their tentacles into hands. When these clones are defeated, they dissolve into dust-like particles.

Deoxys is an abbreviation of deoxyribonucleic acid—or DNA—the medium of genetic code in many cellular organisms. It was mentioned in the 7th movie that Professor Lund gave it the name Deoxys. 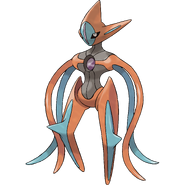 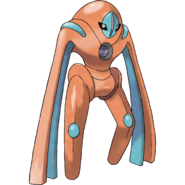 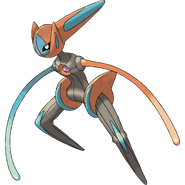