Denos Ghuir is the second community character, with the first being Zerita. He was created during August 12, 2012, with his design being initially finalized on September 21, 2012. However, it took around 3 years for him to appear in anything (with his first canon appearance being in Fantendo Smash Bros. Shattered).

Denos is a traveler that became interested in the Unten mythos during his stop in Zeon, which was shortly after it exploded. After learning of the prophecy and learning how important Unten was becoming after the explosion, he learned that Unten was a catalyst based off his changing background and devoted most of his life trying to piece together the original history.

In the new Fantendoverse, he is a intergalactic "tourist" with his buddy Logi, buying and selling artifacts from different worlds. He is still apparently watching Unten, although from more of a distance.

Denos is a green skinned humanoid alien with two eyes, one of which is functional and is a simple white eye with a black pupil. The other eye has a cracked pupil and is red, with the eye running down his face. It is unknown why it's like that, but it can't be sanitary. It is possible that he was involved with a drug circle, but again, this is all unknown.

Denos was a traveler that was seeking knowledge about Zeon and learned of the procephy. Although the two never officially met in any kind of real matter, Denos was still aware of Unten's role in the prophecy and after Zeon exploded he spent time gathering information on what he could on Unten, knowing he was a Catalyst shortly after the Zeon explosion. His memory was unchanged every single time Unten inadvertently changed the past, but locating Unten was difficult without the use of the Fracture. Sometime after the Recolor War he found it and began to reside there, careful not to awaken Clockwarx and searched for hints of Unten's true past.

In Fantendo Smash Bros. Shattered, he finally meets Unten and explains his vast knowledge about who Unten and what his purpose is. In the New Universe that follows, Denos is still following Unten, his mind still unchanged from the events that unfolded in Shattered.

Denos is able to shuffle cards in mid-air, a seemingly trademark move of his. He can also do this with other objects. He also has retractable claws on his palms, which he uses to grasp the head of his opponent and stab them when the palm is against their head.

He is also skilled with a rocket launcher. He can amazingly do this even with only one functioning eye.

As he appears in the canon (Fantendo Smash Bros. Shattered).

Another design by Sorastitch. This one is much earlier. 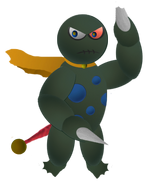