Demi is a fairy appearing in the Winged Nexus series. She was not born in Pretiuma, but rather on the island of Alencarh.

From a young age, the stone elemental fairies of Alencarh are trained in the usage of stone magic, for the two tasks they are expected to perform when they grow old enough: mining, or building. Demi, being rather impatient, found mining too boring and hence decided to study building. Years of study in architectural design and she became one of the better young builders in Alencarh.

Her architectural skill eventually got Demi a contract to help build an extension to the Pretiuman Academy of Magic, which she had to fly overseas to get to. While working one night, she is attacked by a vampire who flees to the Whitefire Den after she fights back. Attempting to report the event to the authorities, they don't believe her which causes her to travel to the cave herself.

Demi has short, light brown hair. She wears a white shirt with brown overalls on top, and is often seen wearing goggles.

Demi is rather tomboyish, impatient, and hot-headed. She goes ahead with things, without considering the consequences, and being overconfident in her abilities to right any problems this may cause.

As an elemental fairy, Demi has the natural ability to use magic relating to a specific element; in her case, stone. She uses this to build things, and eventually learns how to use it for combat purposes. 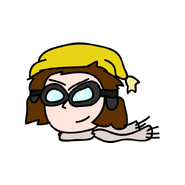 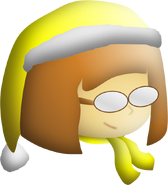 Christmas art by Toad'ShyGuy (t∣b∣c).
Add a photo to this gallery
Retrieved from "https://fantendo.fandom.com/wiki/Demi?oldid=1066520"
Community content is available under CC-BY-SA unless otherwise noted.