Dead Walkers are a variety of enemies which appear in Psychological's Dream Mode. They represent how the player is nearing insanity and how the player actually reaches the point at which he/she becomes deranged and sadistic.

Dead Walkers are humanoid creatures who all don a blue shirt and brown jeans, both of which are stained with blood. They have black growths on their face and neck, and their skin is rotting and a shade of brown.

Dead Walkers will slowly roam around the area they're in, looking or any victims to try and kill. Once they see their new victim, they will chase it down frantically until the victim tires out, where they will begin killing their it and start eating off the muscle and bone of it. Dead Walkers generally are not scavengers and perfer live victims rather than the dead.

In Psychological, Dead Walkers are common in the Mental Asylum Scenario, they are seen walking around waiting for victims to come along. As the player gains insanity, the Dead Walkers will begin to appear in other scenarios such as the Grassy Plains, making them notoriously hard to avoid. They are also hard to kill, like many enemies ingame. 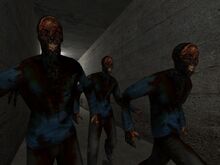 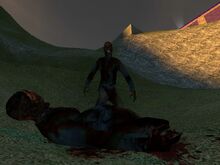 The player battling a second Dead Walker after killing one
Add a photo to this gallery
Retrieved from "https://fantendo.fandom.com/wiki/Dead_Walkers?oldid=2046887"
Community content is available under CC-BY-SA unless otherwise noted.