Dawn has always been a very feisty person. She actively sought out brawls and often came out on top. As such, she was quite confident, but always concerned about the wellbeing of her opponents and those around her. She initially fought to gain money (by robbing people or entering fights with money as the stakes), but later found a love for it.

After waking in the Fearscape, Dawn has found herself, and only herself. Any compassion or empathy she previously felt vanished in the hostile environment, replaced by self-preservation and confidence in her newfound abilities. Dawn does care about her team, but not very visibly.

Dawn is a 16 year old girl of average height. She has slightly messy, wavy purple hair and dark blue eyes. Her skin is somewhat pale and she has a strong build. Dawn's outfits often incorporate purple as their main colour and a - usually grey - teardrop-like shape (which later becomes the emblem of the Fear Fighters).

Her outfit in Fear Fighters (2016) consists of a sleeveless purple dress with a wine-coloured stripe, on top of what appears to be a black bodysuit with baggy sleeves. She wears grey boots. Earlier depictions pictured her with a belt slung across her shoulder.

In Amy Jackson's Pro Skater, Dawn wears a loose-fitting purple t-shirt, complete with a wine-coloured stripe. Her shirt falls around her shoulders, revealing two black straps. She wears black shorts with cyan streaks on either leg, as well as blue and white sneakers. Dawn also wears a purple wristband on either hand.

Dawn wields the ability to control darkness, a basic ability granted to everyone upon entrance to the Fearscape. Though she is capable of creating beams and projectiles of darkness, she prefers to channel it through her arms and legs to power up her melee attacks. Dawn also is able to hide inside shadows and plunge an area into pitch darkness, though the latter drains her quite badly.

Being a part of the Fantendoverse and the Fearscape, Dawn is capable of traveling between the two by hiding inside shadows. She cannot bring people into the Fearscape who don't belong, but she can temporarily bring one of the Fear Fighters with her.

Dawn likes to be up close and personal to her opponent, a trait not shared by most of her competitors. She's mastered the skill of channeling darkness into her feet or fists, allowing for more powerful hits. Yes, Dawn prefers to go old-school, though she isn't afraid to shoot pure darkness at her foes. Dawn is able to hide inside the shadows, allowing her to ambush her enemy when they least expect it. The more attacks Dawn lands, the more a gauge - taking the form of up to 5 teardrop-like shapes - above her HP will fill. When this gauge, dubbed the "Umbra Guage" is filled, Dawn can cover the screen in darkness, allowing her to move freely and attack as she pleases.

Disney vs. Fantendo: A Collision of Worlds!

Dawn Shadows will appear in the upcoming Disney vs. Fantendo: A Collision of Worlds! She is also a part of the starting roster.

Dawn, as drawn by Amy (t∣b∣c)

Dawn, as drawn by Exo (t∣b∣c) 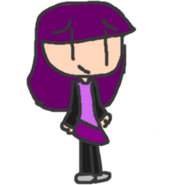 Dawn, as drawn by Nano (t∣b∣c)

Dawn in a hoodie resembling Peridot from Steven Universe

Dawn, as drawn by Fuzzy (t∣b∣c)
Add a photo to this gallery

Retrieved from "https://fantendo.fandom.com/wiki/Dawn_Shadows?oldid=2687202"
Community content is available under CC-BY-SA unless otherwise noted.