Dawg is the cynical, grumpy twin brother of Scratch Kat. He's the head of the household, handling all the bills, taxes, and general upkeep of the group.
He hates the situation he's been forced into, he hates anything getting in the way of his tasks, and he hates the government, ESPECIALLY Snaily Joe. No reason in particular, Joe just gives him bad vibes.
Dawg tends to get dragged along on Scratch Kat's misadventures and is often at odds with Skett and other F.A.N.T chaperones.

Dawg appears as a default fighter.

Dawg appears as a main character, along with several alternate versions of himself.

The only one that matters. 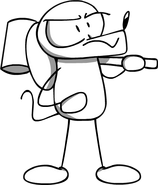 Add a photo to this gallery
Retrieved from "https://fantendo.fandom.com/wiki/Dawg?oldid=2609583"
Community content is available under CC-BY-SA unless otherwise noted.