“Life is not like a game. There are no extra lives.”
— David

David is a male Human who has many different types of powers and he is the star of his own series.

David is a 14 year-old boy who is your typical gamer and otaku. He comes from a city named Middletown where he lives with his brother Thomas. When he was six his father was killed by the evil Max Power ever since David has been stopping Max at his evil plans to take over the world. He gets some help from his brother Thomas and some of his friends. His life begun has a baby where he lived in a small town named Smartsville when he was 3 months old he gained baby brother named Thomas. When he and Thomas were four their family had to move out because of their dad's job. They moved to a city named Middletown and when David and Thomas were six their dad was taken hostage to a man named Max Power he later killed the two boys' father at a robbery. Then when the two were 11 they discovered they had secret powers that can save the Earth. Turned out that the reason Max Power killed the brother's father is because he wanted both of their powers to ruled the Earth, but their dad declined. Ever since the two try to stop Max Power and his evil plans and get revenge on what happened to his father. David is also allergic to cats.

David is a strong, funny and brave boy. He loves to go on adventures solo or with his brother Thomas. He is a also very brave and can overcome any obstacle and adventure. He also is very caring to his friends, family, animals, and the people of Middletown, Smartsville, and Jewelsburg. David is very sporty and not only is he good with his powers, but he's also good at martial arts. David can be annoyed easily such as being called Davy and can travel to many places at super speed, has a good sword arm, and can take electricity from machines and power lines.

David appearance is he has black sort of messy hair, red eyes, a blue shirt with a lightning bolt on it, dark blue sleeves, light blue pants, and green shoes.

Thomas is David's little brother and sidekick. They both work together to stop Max Power or him and his brother Roger Power. Sometimes they go on solo adventures or working together, the two had held a strong friendship ever since they were young. Together they will be a great duo for life.

Maria is David's girlfriend and David had a crush on her since they both were 6. Maria calmed David down when his dad died. Their relationship started in the game David DS after David saved Maria from Max Power.

Max Power is David's enemy. Max is the reason why David's dad died. For years Max wanted David's power so he can rule the world as a toxic wasteland. He also has stolen David's girlfriend in some games like David DS, David and Thomas: Battle of the Heart, and David's Galactic Adventure. He sometimes calls David "Davy" which really annoys David.

David doesn't really know Roger very well, but he knows that he is his brother's enemy and every time Roger does something evil David goes with Thomas to stop him, but Roger does kind of hate David.

Vavid is the evil robotic clone of David which appears in David and Thomas: Attack of the Clones. David did had to fight Vavid one time in the game and hates him since he was created by Max Power.

David really doesn't really know about Samoth which is Thomas' evil clone that appeared in the same game Vavid was in. David one knows that he hates Thomas and was created by Roger Power.

Ruby is one of David's friends and David is good friends with Ruby. He does know that she is Thomas' girlfriend and the little sister of Maria. She gave David a secret item in David's Galactic Adventure.

Although initially disliking Leila due to constantly associating him as a kid and with childrens activities he has little respect for her until she sees him mature with Bianca, but they seem to get along well now in recent RP's.

A full gallery of all artwork of David. 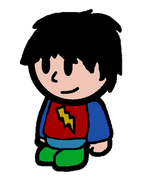 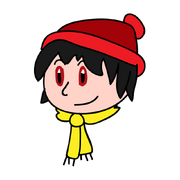 By Yami no Tenshi (t∣b∣c) 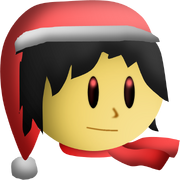