Dash Yoshi is one of Yoshi's power-ups in Super Mario Galaxy 2, along with Blimp Yoshi and Bulb Yoshi. It is achieved by eating a Dash Pepper. In this form, he turns tomato orange and gains the ability to run extremely fast. Dash Yoshi will automatically run, and won't stop unless he hits a wall or an obstacle. The speed he runs can allow him to run up walls and run over water, reaching new areas that he otherwise couldn't access. However, his abilities are limited, and he will revert to his normal state after a short time, and must eat another Dash Pepper to prolong the effects. When jumping, he stops moving at high speeds, but will start running again as soon as he hits the ground. Dash Yoshi also retains the ability to use his tongue and Flutter Jump. Dash Yoshi can also be taken through Launch Stars, and the time limit for his abilities will temporarily stop until he lands. Mario can dismount Dash Yoshi to stop the power-up and / or save himself.

His high speed makes it more difficult to control Dash Yoshi, making it easy to swerve off a ledge or hit an obstacle. 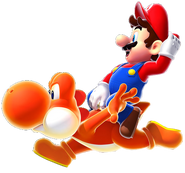 Dash Yoshi in Super Mario Galaxy 2
Add a photo to this gallery
Retrieved from "https://fantendo.fandom.com/wiki/Dash_Yoshi?oldid=3096540"
Community content is available under CC-BY-SA unless otherwise noted.