Start a Wiki
“Those bejeweled hearts will be mine!”
— Daroach, in Kirby Star Allies


Daroach is a recurring character in the Kirby series, originally the primary antagonist in Kirby Squeak Squad, but later became an ally. He is a mouse-like creature that wears a red top hat and cloak, and is the leader of a band of thieves known as the Squeaks.

Daroach first appears as the main antagonist of Kirby: Squeak Squad. He and the Squeaks steal a chest from King Dedede, thinking that it contains ultimate power. Kirby chases them down thinking the chest contains the strawberry shortcake that was stolen from him. It turned out the chest contained Dark Nebula, which possessed Daroach. Kirby defeats and frees him, and he apologizes for his actions. He would later go on to be an ally to Kirby, helping him on his adventure in Kirby Mass Attack and even venturing with him in Kirby Star Allies. Albeit, he and the Squeaks are still treasure thieves.

Daroach debuts in Kirby: Squeak Squad as the primary antagonist. He and the rest of the Squeaks steal Kirby's Strawberry Shortcake before he can eat it. The pink hero mistakenly thinks King Dedede stole it, and he runs to his castle. He has a run-in with the Squeaks along the way, and he narrowly escapes.

The Squeaks make another appearance just as King Dedede tells Kirby about the treasure chest they stole from him. Daroach says that he stole the chest, thinking it contains ultimate power. Before the escape, Dedede gets his revenge by throwing Kirby at them, sending them tumbling downward into Nature Notch. Kirby has many more encounters with the Squeaks from then on, though he doesn't get to fight Daroach until later on.

Daroach is the boss of the sixth world, Ice Island, and is battled in his hideout, which resembles his top hat covered in snowflakes. In battle, he will teleport around the arena, making him difficult to attack. He attacks by throwing bombs at Kirby, shooting icy projectiles with his scepter, and shooting ricocheting stars with the Triple Star. The floor is also covered in ice, making mobility difficult.

When Kirby defeats Daroach, Meta Knight swoops in and takes the treasure chest before Kirby can reach it. He is quick to follow the masked swordsman into Orange Ocean, where the two battle. Just as Kirby is about to open the chest, Daroach appears out of nowhere and pushes him out of the way, wanting to absorb the ultimate power it contains. However, instead Dark Nebula is released from the chest, and possesses the thief. This transforms him into Dark Daroach, and Kirby must battle him as the penultimate boss of Gamble Galaxy.

As Dark Daroach, he uses upgraded attacks from his previous battle. His ice beams are bigger and deal more damage, his bombs are larger and cause a pillar of flames upon detonation, and he uses the Triple Star twice in a row. The stars that bounce around are also larger, and he teleports around the area considerably more.

After Dark Daroach is defeated, Dark Nebula emerges from his body as a dark star and flees. Kirby then uses the Triple Star to have a final battle with Dark Nebula. After it is destroyed, the Squeaks return Kirby his Strawberry Shortcake as an apology for their wrongdoings, saying that they will find somewhere else to steal treasure.

Daroach returns in Kirby Mass Attack, this time as a helpful ally rather than an antagonist. He and the rest of the Squeaks arrive at Popopo Islands in search of the Medals there, and enlist on Kirby's help. His airship can be accessed from the world map after beating Green Grounds.

When talked to, he will tell Kirby a fact about the islands, as well as give hints as to where Medals are. Some hints he gives are related to his opinions and experiences as well, and he even tells the player to charge their Nintendo DS if it is low on battery. If he does twice, he accuses Kirby for standing round for "small talk".

When Kirby gives Daroach all 186 medals around the Popopo Islands, the final sub-game, Survival Rush, is unlocked. When this is done, he bids Kirby farewell as he pilots the airship away from the Popopo Islands.

Daroach makes his first playable appearance in Kirby Star Allies. He was added as a Dream Friend alongside Adeleine, Ribbon, and Dark Meta Knight in July 27, 2018 during the game's second update. It is said that he ventures with Kirby in order to get the Jamba Hearts for himself, seeing them as valuable treasure to steal.

His moveset uses moves that he used in his boss fights in Kirby: Squeak Squad, both as his normal self and as Dark Daroach, including shooting ice projectiles from his scepter, throwing bombs, and using the Triple Star. He can also summon his followers, Spinni, Storo, and Doc to attack enemies.

Daroach appears in Super Smash Bros. Ultimate as an Ace-class (★★★). Unlike many other Spirits, the Daroach Spirit has no Spirit Battle attached to it. The only way to obtain it is to summon the cores of Count Cannoli, Mouser, and any two Neutral-type Cores. He is an Attack-type Spirit, and as such greatly increases attack power when equipped. If it is enhanced to level 99, the Daroach Spirit will become Dark Daroach, a Legendary-type Spirit (★★★★) that also increases attack power. Dark Daroach also increases the attack power of fire and explosion attacks further. Daroach and Dark Daroach are lists as number 351 and 352 in the order respectively.

Both Daroach and Dark Daroach use his artwork from Kirby: Squeak Squad.

Daroach is a gray mouse-like creature with two floating paws, and three yellow claws on each paw. He wears a red top hat and a red, jagged cloak around his body, and usually carries around a scepter within it. He has large ears that his hat forms around, and orange eyes.

As Dark Daroach, his fur is a much darker gray, and his clothes take on a more purplish hue rather than straight red. His eyes are also glowing, and he is constantly engulfed in flames.

Like King Dedede and Meta Knight, Daroach isn't explicitly evil, instead stealing treasure for his own ambition. His and the Squeaks motivations for treasure hunting are unknown, though it is implied that they sell whatever they steal to make profit. While mischievous, he also has a good side, giving Kirby back the Strawberry Shortcake the Squeaks stole as an apology at the end of Kirby: Squeak Squad.

Some of his personality and experiences are revealed when he gives hints in Kirby Mass Attack. This includes him thinking of the Squeaks as a family, implying he is very loyal to his followers, him disliking cemeteries and slimy things, and even mentioning a life of romance in the past. He also mentions that Dedede "spoiled it" by building a "beyond tacky" resort on the beach in his image, implying he has some disdain towards the king.

Daroach appears as one of the bosses in Kirby: Nova Zoo. He attempted to steal the magic book of Queen Sectonia to make himself more like a master of thieves, though it twisted him and made him look like a roach. In this form, as Da Roach, mainly attacks with bombs and his scepter, similar to his boss fights in Kirby: Squeak Squad. When his health bar is halfway depleted, he coats the entire room in ice with his scepter, making the ground slippery.

Da Roach also has an EX form. He is much stronger in this battle, and during the second phase, he coats half the room in ice and half the room in lava vents that generate heat to damage Kirby at timed intervals. His scepter can also use ice and fire attacks.

Daroach appears in Super Smash Bros. Charged as a newcomer. He is a quick, nimble fighter who uses his claw slashes for the majority of his moveset. They don't deal much damage, but they are fast, making them ideal for combos and rushing opponents down.

His moveset is almost entirely derived from his moveset in Kirby Star Allies. His neutral special, Ice Shot, lets him fire an ice projectile from his scepter to freeze opponents, which can be charged into a giant laser that deals more damage. His side special, Daroach Bomb, lets him throw a bomb in an adjustable arc that explodes on impact, which can also be charged for him to throw a larger, fiery bomb that creates a pillar of flames when it explodes. He uses an upwards version of his Hunter Claw attack for his up special, and is particularly similar to Simon and Richter's Uppercut. Finally, his down special is Squeak Summon, which lets him summon Spinni, Doc, or Storo, in that order. If any of the three are already in play, he summons a Squeaker instead, which more or less act like King Dedede's Waddle Dees in Super Smash Bros. Brawl.

Daroach's Final Smash, Squeak Squad Assemble, has him summon Spinni, Doc, and Storo at the same time. He also summons a hoard of Squeakers, which cover the stage and create mayhem for the opponents. After awhile, they disappear. 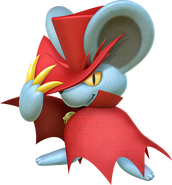 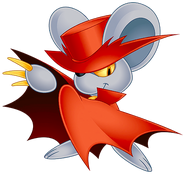 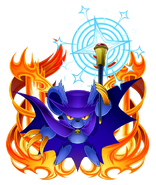 Da Roach EX in Kirby: Nova Zoo
Add a photo to this gallery

Retrieved from "https://fantendo.fandom.com/wiki/Daroach?oldid=3210102"
Community content is available under CC-BY-SA unless otherwise noted.