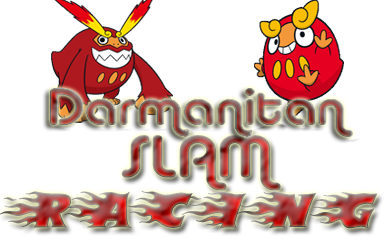 Darmanitan Slam RACING is a racing game in the Darmanitan Slam series. It was developed by VictoryStar (t∣b∣c). It was released in April 2013 for the Wii U and Nintendo 3DS. Chronologically, it follows Darmanitan Slam 2. In this game, Darmanitan and his friends race through time (literally) as a strange force sends them back to the past. This game features racetracks and characters from other Fantendo series.

The game does not focus too much on plot. One day in Pokeémon Island's jungle, Darmanitan comes across a Celebi under duress. She claims that she is from the past, and she got lost in the future after a chain of unfortunate events. She asks the Blazing Pokémon for help, and he agrees. Celebi laughs evilly andmockingly wishes him luck on his journey. She then sends Darmanitan and his friends back to the point where time began. Darmanitan is furious that he trusted Celebi, who truned out to be evil, and is determined to go back home.

All characters after Snow Pikachu are unlockable.

Retrieved from "https://fantendo.fandom.com/wiki/Darmanitan_Slam_RACING?oldid=766762"
Community content is available under CC-BY-SA unless otherwise noted.