Darkness is the main Antagonist in the Cursed Enigma (Series).

Darkness appears as the final boss in the game. He resides in his base, Darkness Sky, where he guards the final part of the mega jewel, the Moonlit Sphere. The player must slice off Darkness's tendrils, before hitting the back side of his head. The player must repeat this 5 times, to defeat him. He will regenerate 10 seconds after his tendrils are knocked off.

Darkness appears as the boss of Chapter 43: Darkness Realm. His boss fight is similar to that of his appearance in Cursed Enigma.

Cursed Enigma: The Secret of the Wind

Darkness reappears as a boss in this game. It is unknown if the fight is the same.

Darkness appears as an unlockable driver in this game. He is very slow but has a good drift, his vehicle is entitled the Black Squid.

Darkness reappears in the sequel, where he must be fought again, in exactly the same way. He appears in Level 8, the Shadow Catacombs and Level 10, the Sky Temple, where the player must fight all the bosses from Cursed Enigma, who were resurrected by Robo. 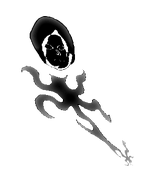 Moonlight Racing
Add a photo to this gallery
Retrieved from "https://fantendo.fandom.com/wiki/Darkness_(Cursed_Enigma)?oldid=659961"
Community content is available under CC-BY-SA unless otherwise noted.