“The troops now call her the 'Dark Hunter.' It is a fitting title.”
— Space Pirate, Metroid Prime 2: Echoes

Dark Samus (Japanese: ダークサムス Dāku Samusu) is a recurring character within the Metroid franchise, primarily appearing as a major antagonist within the Metroid Prime titles. Dark Samus is a doppelgänger of series protagonist Samus Aran, who was born from the merger of Samus' Phazon Suit (and DNA within it) with both the remains of Metroid Prime and the mutagenic substance known as Phazon. Despite technically being genderless, Dark Samus is always referred to with female pronouns.

Dark Samus is a cruel killing machine who displays no emotion other than a desire to destroy those who stand between her and her goals: Dark Samus' primary goal is to absorb Phazon, and possesses an insatiable craving for the radioactive substance. Though merciless and sadistic, she is also a very intelligent and calculating character as of Metroid Prime 3, who will form temporary alliances with others should they benefit her; however, she will not hesitate to destroy these alliances and use her allies as pawns to further her own ambitions. Throughout the Metroid Prime series, Dark Samus has only shown compassion to Metroids imprisoned against their will; this likely stems from her origins as Metroid Prime.

Dark Samus appears as a captain in Metroid Strikers.

Dark Samus returns in Super Smash Bros. Calamity as an assist trophy again. She acts the same as she did in the previous game, sending out a plethora of Phazon energy based attacks to her opponents.

Following her debut as a playable character in the Super Smash Bros. series with Super Smash Bros. Ultimate, Dark Samus reappears in Jake's Super Smash Bros. once again in such a capacity. Though Dark Samus is once again classified as an Echo Fighter, her moveset has been adjusted in several ways to differentiate her from Samus. The most notable changes are in her up special move - which has been completely changed to be a teleportation instead of a Screw Attack jump - and her Final Smash - which sees her summon two Dark Echoes to fire three [thin] beams of energy instead of one. Some of Dark Samus' other attacks have also received minor alterations as well, for instance her Bomb is now larger and takes longer to detonate than before. 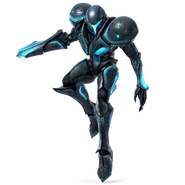 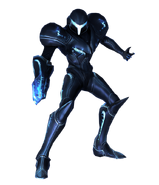 Dark Samus as she appears in Super Smash Bros. Calamity. 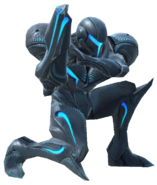 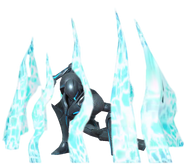 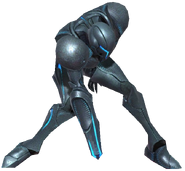 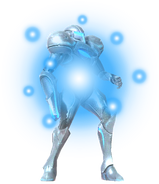 Add a photo to this gallery
Retrieved from "https://fantendo.fandom.com/wiki/Dark_Samus?oldid=3208976"
Community content is available under CC-BY-SA unless otherwise noted.