Dark Meta Knight is a recurring character in the Kirby series, usually serving as an antagonist. He is the Mirror World counterpart of Meta Knight and, as his name suggests, takes on a darker appearance.

He first appears in Kirby & the Amazing Mirror as the secondary antagonist and penultimate boss. He was created from the power of the Mirror World in Meta Knight's image. He splits Kirby into four, and they chase him into the Mirror World. During this time, he also kidnaps Meta Knight and traps him in the Dimension Mirror, splitting it into several pieces. Later on, he appears in Kirby: Triple Deluxe as a surprise final boss of the Dededetour sub-game, and later in Kirby Star Allies as a playable character in the form of a Dream Friend. The circumstances regarding this, especially considering he is typically a villain, are unknown.

Kirby first confronts Dark Meta Knight as the boss of Radish Ruins, the game's seventh world. Here, he is known as ? ? ?. He disguises himself as the real Meta Knight, and even fights like him as well, using a variety of swordplay and aerial attacks. However, he doesn't provide a sword for Kirby to use at the beginning of the fight. After being defeated, his disguise fades, and Dark Meta Knight's true colors are revealed.

He is later encountered inside the Dimension Mirror. Dark Meta Knight attempts to use the disguise again, but his real counterpart appears and breaks it, forcing him to battle Kirby in his true form. He is capable of the same attacks from the previous encounter, though can use other moves such as creating tornadoes with his sword or disappearing and reappearing. After being defeated for the second time, he shatters, seemingly killing him.

Dark Meta Knight makes a surprise return as the final boss of the Dededetour sub-game in Kirby: Triple Deluxe. Once King Dedede defeats Shadow Dedede, he is transported to the Mirror World, where he battles Dark Meta Knight. In this game, he is referred to as Dark Meta Knight's Revenge.

Compared to his fights in Kirby & the Amazing Mirror, Dark Meta Knight has a slew of new attacks. He can create giant clones of the Galaxia and raise them from the ground and create mach tornadoes. Halfway through the battle, Dark Meta Knight will start creating clones of himself made of glass. If these clones are attacked, they split into glass shards that home in on Dedede and damage him, so he must pay attention to who the real one is. Once Dark Meta Knight is defeated, he is sucked back into the Dimension Mirror, which Dedede smashes to pieces with his hammer.

Dark Meta Knight is also battled by Kirby in The True Arena, as the penultimate boss. His battle is the same, though rather than being sucked into the Dimension Mirror upon defeat, he shatters into pieces of glass.

Dark Meta Knight makes his first playable appearance in Kirby Star Allies. He was added as a Dream Friend alongside Daroach and Adeleine and Ribbon in July 27, 2018 during the game's second update. It is said that he ventures with Kirby because he is drawn to and interested in the dark powers of the Jamba Hearts.

His moveset mainly utilizes his version of the Galaxia, and is similar to Kirby's Sword Copy Ability and Meta Knight's take on it. However, he can use attacks from his boss fights, such as creating giant clones of the Galaxia to attack enemies, holding up a mirror shield to deflect projectiles, and creating clones of himself.

Dark Meta Knight doesn't physically appear in Super Smash Bros. Ultimate, though Meta Knight has an alternate costume based on his coloration. Additionally, his mask has an added crack over his left eye, much like Dark Meta Knight's.

As a Mirror World counterpart of Meta Knight, Dark Meta Knight takes on a very similar appearance to him. He is a small, round creature bearing resemblance to Kirby who wears a mask. Unlike Meta Knight, the mask has spikes horns and a slit for the eyes that is more angled downward, giving the impression of a constant scowl. The mask also has a crack on the left side over his eye. His colors are also more subdued than Meta Knight's, taking on a mostly black and gray appearance as opposed to his normal counterpart's blue and purple.

He has wings like Meta Knight, but they're black and tattered at the bottom. He wears a black cape with Meta Knight's insignia on his right shoulder (mirroring how Meta Knight has his on the left shoulder) and dark red sabatons. His sword, a near copy of Meta Knight's Galaxia, is silver, has seven branches of blades as opposed to the Galaxia's typical five, and has a sapphire embedded in the hilt.

Compared to his normal counterpart, Dark Meta Knight has a much more cruel and violent mindset. He doesn't have a sense of knight's honor, and prefers to ambush his opponents without giving them a chance to defend themselves. In Kirby & the Amazing Mirror, he also doesn't provide a sword for Kirby to use like Meta Knight usually would. Dark Meta Knight also seems to have a desire to impersonate his real world counterpart so long as he isn't around.

After his defeat in Kirby & the Amazing Mirror, his motivations seem to be fueled by revenge, hence his battle in Kirby: Triple Deluxe being labeled as "Dark Meta Knight's Revenge". Aside from this, his motivations are unclear, especially when he joins Kirby and his friends in Kirby Star Allies (though it is stated that he is interested in the dark power of the Jamba Hearts).

Humorously, Dark Meta Knight is shown to not be artistically talented, as his drawing of the Galaxia is the poorest quality out of Adeleine and Daroach. This is shown by beating the Guest Star ???? Star Allies Go! sub-game as any of the three of them.

Dark Meta Knight appears as a newcomer in Super Smash Bros. Charged. Much like Meta Knight, he is a quick lightweight who specializes in close-quarters combat, and has access to multiple midair jumps and the ability to glide thanks to his wings.

Dark Meta Knight's moveset is mostly derived from his moveset as a Dream Friend in Kirby: Star Allies, as well as the Mirror Copy Ability in various Kirby games. For the latter, he has attacks that can split himself into multiple copies to attack from far distances, most notably his neutral special Dark Mirror. His side special, Wall of Mirrors, has him create a wall of mirrors in front of himself that can reflect projectiles, but can be destroyed if it takes enough damage. He uses the version of Shuttle Loop that has been used for Meta Knight's up special that was used in Super Smash Bros. for Nintendo 3DS / Wii U onwards, while Meta Knight himself uses its Super Smash Bros. Brawl incarnation. His down special, Mirror Swords, lets Dark Meta Knight summon three large copies of his sword from the ground in front of himself. 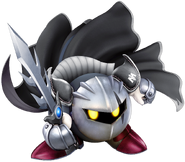 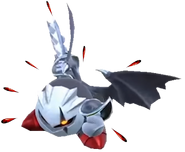 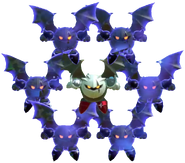 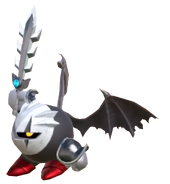 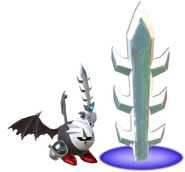 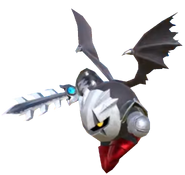 Add a photo to this gallery
Retrieved from "https://fantendo.fandom.com/wiki/Dark_Meta_Knight?oldid=3229123"
Community content is available under CC-BY-SA unless otherwise noted.