Dark King Boo appears in New Super Mario Sunshine as a boss. He uses Dark Boos and blue flames to attack you, and eventually he will try to follow you. Face the opposite direction and then ground pound when he's close to you; do this three times and he will die. 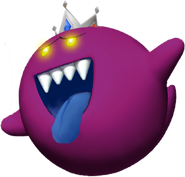 Add a photo to this gallery
Retrieved from "https://fantendo.fandom.com/wiki/Dark_King_Boo?oldid=3345033"
Community content is available under CC-BY-SA unless otherwise noted.