Dark Fungi (2011) is a game in the Dark Fungi series, and the first of the series reboot. It stars Gorge in an all new quest to gather the 7 Elemental Stones.

Dark Fungi is a Third Person adventure game, meaning you are staring at the characters back as you play. You gather red, blue, and orange gems to restore health, magic, and stamina respectively. Like previous games, you can upgrade the three main characters' levels from 1 through 40.

The game begins showing a blurry meadow. Gorge then slowly appears in a frame-by-frame order. It then shoes the Current Gorge you says that that was his childhood; his life before his duty. He says that he was chosen to be the protector of the Elemental Stones. He also says that recently, they were stolen from the Secret Altar. He states that he willl find them if it's the last thing he does.

After Gorge exits Eirian, he is attacked by Serpicide, who has the Water stone. The two fight, and Gorge wins. Serpicide then procedes to vanish, stating that he doesn't need that stone, as he has the otehr six. Gorge then realizes that his target is Serpicide; the evil matsermind that stole the stones.

He reaches The Great Dam of Eate. He finds a strange creature, who claims that his name is Matter. He says he was given the Fire stone by Serpicide and that he will not give up. After an extremely difficult fight, Gorge wins, and obtains the Stone.

Kindle is seen in Serpicide's lair. She is told to find out Gorge's current location. After finding out he is just south of the Great Dam of Eate, she informs Scythe, a strange creature with a scythe blade in his head, where he is, and sends him out. But after overhearing Serpicides plans about destroying Eate while on her way back to her lab, she has second thoughts about sending Scythe to kill Gorge. She sneaks past Serpicide's guards, gets in a hovercraft, and flies out to Gorge's rescue.

After reaching the Great Dam of Eate, she finds Scythe approaching Gorge. She tackles him, and a fight ensued. Kindle won, and snatched the Ice stone from Scythe. She runs up to him and explains that she is sorry for sending Scythe out to kill him. She explains she worked for Serpicide as a scientist, but after overhearing his plan, she quickly left his team. He is unsure about trusting her, after seeing the wristband on her arm; Serpicide's signature emblem.

Before anymore explanation, Matter slams his hand into Gorge, rendering him vulnerable. Kindle blocks a punch directed at Gorge. Matter wonders why his "brethren" is attacking him, but is kicked by Kindle in mid-question. The two fight, with Kindle losing. Right before he kills her, he is knocked into the Dam by Gorge. The two agree to help eachother defeat Serpicide. Kindle notices the Light stone that Matter dropped, and picks it up.

Zache is wandering in the Eternal Forest when he comes across an old temple. As he approaches it, he falls into a trap room. Zache, after regaining consciousness, searches for an exit, apon finding a hidden tomb. After progressing through the large room, he makes it into the main Temple. Amazed at the detail, Zache comes across the Earth stone. Remembering that his best friend, Gorge, guards these, he stashes it in his shirt.

Zache leaves the temple, and leaves the forest entirely. He wanders for miles before finally reaching the Sacred Fountain of Life. He meets Scythe there, who attacks him, sensing the stone.

After a fight, Zache is defeated, and knocked to the ground. Right before being killed, Zache uses the stone and throws a chunk of earth into Scythe's scythe. He then picks up the stone, with Scythe attached, and throws it into a building. He then notices that Scythe dropped an Elemental Stone, the Thunder stone to be exact. He grabs it, and sprints away from the Fountain, towards the Great Dam of Eate.

Gorge and Kindle return to the altar and place the 4 stones they have retrieved. A strange blue figure calls Gorge the Hero of Eate. He introduces himself, and two other red and gray figures, as Winson, Mahogany, and Moyan. They state the are the creators of Eate, and they need his help. He gladly accepts. They tell him tat a familiar face has collected two more stones, single-handedly. Gorge immediately recognizes this person as Zache. He asks if he could be lead to him. Winson opens up the Portal World, and Gorge and Kindle enter.

After reaching the end of the portal, the two find themselves at the Temple of Darkness. They also find Zache, claiming to the building that he wants to return the stones because he doesn't want to be killed because of them. Gorge and Kindle approach him. He notices and greets them. He tells Gorge he found two of the stones and he hands them to him. Winson then informs the group that Zork, master of darkness, lies inside this palace. The three enter with caution.

After reaching the throne room, the trio are greeted by a door slam. Zork then appears out of nowhere infront of them. He calls them intruders and says they will only live if they can beat him.

After a long and hard battle, the heroes prevail, and Zork gives up the Dark stone. The heroes are then transported to the Secret Altar. They place the last three stones in their places, and the Altar lights up again. Winson then informs them that their last task is to stop Serpicide's plot to destroy the world. The heroes then venture into the Portal World again. They exit, and are faced with the Lair; Serpicide's current residence. They enter, scared and curious.

After finding Serpicide's room, he engages in a battle with Zache; who loses. He battles the "traitor", Kindle, who also loses. He is faced with Gorge, who, surprisingly, loses the fight. Before being killed, Winson sends the power of the Elemental Stones; the power of Eate, to Gorge. He rises up, levitating. He then strikes Serpicide, and a battle ensues. Gorge defeats Serpicide, and Kindle unarms the bomb that would have destroyed Eate in 3 minutes.

The heroes are congratulated in Eirian for their bravery, and the credits roll.

This is just a preview; for a full gallery, see this 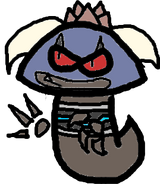 Matter
Add a photo to this gallery
Retrieved from "https://fantendo.fandom.com/wiki/Dark_Fungi_(2011)?oldid=2363161"
Community content is available under CC-BY-SA unless otherwise noted.