Dark Fungi is the upcoming first game in the Dark Fungi series. It was released on April 3, 2010 for the Hybrid Fusion by Outer Limits Co.. The game follows Gorge and Echo, two Goru teenagers and their adventure in Geronimo to find the Red Clan's leader and stop his invasion in their town of Eirian.

Dark Fungi is a third person view game, meaning the screen is behind the character. By using the controls, the character can move left, right, forward, back, up, and down. Also, by collecting experience, the player can upgrade Gorge and Echo from level 1 to level 25.

In Eirian, a peaceful town on the planet Geronimo, a Red Clan troop invades the town, attacking innocent Gorus and Berriers. When Gorge and Echo's families are taken captive by the troop, they team up to find the Red Clan's leader and take him down.

After leaving town, they come across Rusty, an abandonned Blockaid. They agree to save him and bring him along. He proves to be a big help by being able to heal injuries.

After getting through many of Red Clan armies and defeating the Red Clan's highest members, the trio finds Red Clan HQ, and enter, only to be ambushed by a small troop of the Red Clan. After defeating them, they find the leader's room and enter. They see the room is empty, and when they turn around to leave, the door slam shuts, and Fang, the Red Clan leader, is revealed. Gorge, Echo, and Rusty attack him, but are pushed off by his magical skills. Gorge's rage that he held inside for taking his family away is released, and he fights Fang alone. The strength he gained allowed him to bypass the power of Fang's magic and defeat him. Fang gives up and lets his prisoners go.

Gorge, Echo, their families, and Rusty, are all reunited and return home, in hopes that the Red Clan was finally defeated. 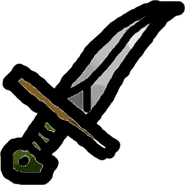 Sword
Add a photo to this gallery
Retrieved from "https://fantendo.fandom.com/wiki/Dark_Fungi?oldid=2046978"
Community content is available under CC-BY-SA unless otherwise noted.