Start a Wiki
“I can't wait to rule The Climber Kingdom! Soon, those climbers will bow down to us!”
— Lolo


In The Legendary Climbers, Lolo and Lala (Better known as The Dark Climbers) are the Ice Climbers arch rivals, well they weren't always. They mark their first appearance in The Legendary Climbers as the villains trying to take over the Climber kingdom! It was up to the climber team to stop them! They are unlockable characters after you defeat them. They make a second appearance in there own game, The Adventures of The Dark Climbers. Their 3rd appearance is in Fantendo Fighters and made their fourth as a hidden race and mini-boss in Ice Climber 2.

The Dark Climbers at first appear very nasty being mean, making insults, and they always thought that one kingdom wasn't enough for them to rule, so they try to take over the other kingdoms.

They have many moves they can use, well 2 are similar to the ice climbers, specifically the hammer moves, but they have a bunch of dark magic moves.
*Dark Hammers: They swing their hammers in front of them.
*Dark Squeal: The climbers twirl around with and swing their hammers around.
*Dark Shot: They shoot dark magic in front that will knock you out for a few seconds.
*Dark Jump: Dark Magic appears under them and they blast upward.
*Dark Beam: You charge a dark beam that can hurt the enemies badly!
*Special Move: Darkmode: They both turn into a giant dark ball and they go around the stage like crazy. This move can be used after your spec-o-meter is full.

Spoiler warning: Plot or ending details follow.
After defeating them, a strange chip comes out of their suit. After the Ice Climbers run it by the general, he finds out it's a chip that forces people to become evil. After you have to fight the REAL final boss, with you having to play as the Dark Climbers. They permanently become playable after you beat the Polar King. They are now best friends with the Ice Climbers, and they still rule the Dark Kingdom today.
Spoiler warning: Spoilers end here.

After the game, their personality is nice, caring, and funny.

The Dark Climbers are the main villians of this game! This is their first game appearence.

The Adventures of The Dark Climbers

The Dark Climbers now star in there own game, where they travel through different worlds in order to get back to The Climber Kingdom!

The Dark Climbers are set to appear in Fantendo Brawlers as starter characters. There moveset will be similar to Fantendo Fighters, using moves from their games.

The two appear three quarters up montain 48 as a hidden race, Nana & Popo stare towards the dark climbers, They all begin to jump up, this is considered the hardest race in the game.

The Dark Climbers are set to appear in Fantendo Smash Bros. Shattered as unlockable characters. Their moveset will revolve around their dark magic and hammers. They are unlocked by playing 70 matches. Like in Fantendo Fighters, they can have Climber Chats with the Ice Climbers, General, Condor, and usually Topi! 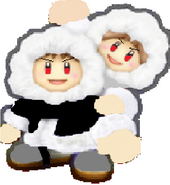 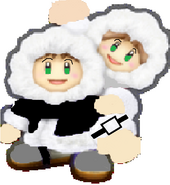 The Dark Climbers when they become good guys. By Mattgamer03 (t∣b∣c) 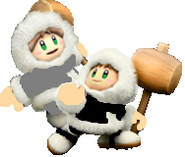 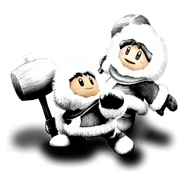 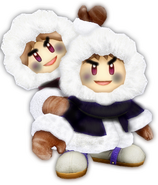 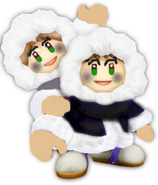 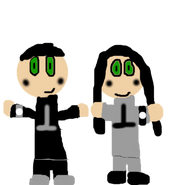 The Dark Climbers without their parkas!
Add a photo to this gallery
Retrieved from "https://fantendo.fandom.com/wiki/Dark_Climbers?oldid=3208888"
Community content is available under CC-BY-SA unless otherwise noted.