Dark Boos are purple Boos with glowing yellow eyes. They first appeared in Paper Mario: The Thousand-Year Door, where they were hidden in Poshley Sanctum and in the Pit of 100 Trials. In The Thousand-Year Door and all games since in which they have appeared, Dark Boos are shown to be more powerful than their white counterparts (both in speed and strength), and tend to also be stealthier.

In McBoo's Mansion, King Boo brainwashed some Boos of Bowser's Koopa Troop to form a Dark Troop. Haunty Mole, a member of this troop, later took over the whole troop and betrayed King Boo. McBoo and friends had to stop the Dark Troop. The Dark Troop includes Dark Boos as common troopers.

Dark Boos in New Super Mario Bros. Omega worked different than other Boos, Boolines or other ghosts. They actually do the inverse of what Boos normally do. Dark Boos approach when Mario faces them, while Boos do that when Mario turns back from those. So Dark Boos will not move when turning back from him. Dark Boos mainly appear in Ghost Houses of later worlds. Dark Boos had in this game glowing eyes, so they actually work as a flashlight in darkness.

Dark Boos appear in Super Mario: Elemental Journey as an enemy. They act similarly to their appearance in New Super Mario Bros. Omega, but they now shoot purple fireballs if Mario isn't looking at them now. They no longer have flashlight-like eyes.

Dark Boos appear once again in Mario & Luigi: Rivals Quest as enemies in Vortex Mansion and The Colosseum. They do the same as the Boos in overworld and in-battle, respectively. The only differences is that they're stronger and faster.

Their look is the same as the other games, being purple, with a blue mouth and tongue, and glowing yellow eyes. They also can make dizzy status ailments rarely times. 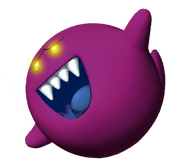 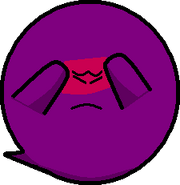 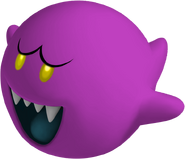 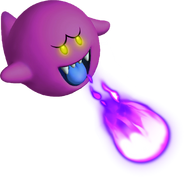 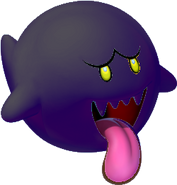 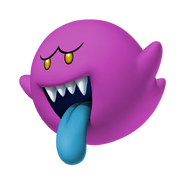 Add a photo to this gallery
Retrieved from "https://fantendo.fandom.com/wiki/Dark_Boo?oldid=2356916"
Community content is available under CC-BY-SA unless otherwise noted.