The first cutscene features Danny sleeping during a stormy night, when he wakes up. After a short cutscene explaining the problem that's bothering the young kid, a loud crashing noise is heard as he finds the culprits of the entire mess, 2 shady looking men in robes. As he wakes up his young sister, Sammy, the two head outside to give chase, beginning the game in the first world, Rose Garden.

After completing the first world, Danny learns that the shady men are Jow Captains and that they are guardians of Seam, a mysterious mage from a faraway land who has seemingly captured the majority of the Golden Empire's population. Danny and Sammy defeat the first Jow Captain, who reveals that they can easily track down a device that will help them get to Seam, but the tower they fought on begins to crumble, and Danny and Sammy end up in the next world, Deserted Suburbs.

Eventually, Danny and Sammy find the Seam Seeker, the device that was said to have the location of Seam: they find out it's at a mysterious island, so the two kids take an underground train to the third world: Endless Waters. After taking a boat, they land on an island that turns out to be one of the tropical bases of Seam; the two eventually find a giant solid sand castle. After defeating another Jow Captain, they find a giant rocket hidden within the base, and use it to fly over to the 4th area: Amazon Jungle.

Danny and Sammy eventually find out that the key to breaking a barrier that blocks the seas of Seam's Island is located in Volcano Valley, and luckily the base of the volcano was located close to a nearby fort in the jungle. Danny and Sammy make their way to this fort and then to the summit of the jungle, but find out the hard way that the volcano had just become active. After mastering the power of the Chrono Bottles, they head into the volcano's crater.

Danny and Sammy successfully defeat the Jow Captain that held the key to breaking the barrier, but things take a turn for the worse as the volcano begins to erupt. This launches the entire fortress inside the crater upwards, and Danny and Sammy land seperated in the 6th world, Celestial Chills. After clearing the world, they end up near a vast sea.

Using a nearby raft, Danny and Sammy climb aboard as they set out, climbing waterfalls and avoiding many dangerous enemies in the 7th world: Challenge Falls. Eventually, the duo reach a large open area, but the key they collected from Volcano Valley begins to glow, rising into the air and exploding, causing a large glass barrier nearby to shatter, where the final fortress is sunken underneath.

As they swim down the tower, they awaken the final Jow Captain, who causes the tower to rise in the sky again. After his defeat, the fortress begins to decline once more, and it ends up crashing in the grounds of Seam's Island. Danny and Sammy travel around the exterior to disable the locks of the doors, and then head inside.

After riding the World Lift, they find the mysterious mage Seam, who believes that he is the hero and won't let "villains" like Danny disturb his visions of the future. However, he is quickly defeated, and left unconscious on the floor and Danny and Sammy continue their ascent, eventually finding many of the captured people.

However, the castle begins to crumble. Danny and Sammy find out a meteor has crashed into the walls, but before they can act part of the castle breaks off, making Danny and Sammy fly off. There, they find a hostile human-like reptilian beast, who attacks the group. After a long and grueling battle, the young twosome manage to win and drive the beast away.

In the end, Danny and Sammy end up rescuing the citizens and triumphantly return back to the Golden Empire. On the way, they meet Seam, who explains that he held the people hostage because he knew of the meteor was on its way and that a terrible beast was inside it.

After beating Single or Multi Player, Super Mode is unlocked. Super Mode is essentially a tougher version of the normal version. Levels have been slightly adjusted to be tougher, enemies are more powerful and move quicker, and there is now a short time limit to most levels, meaning little exploration is possible-however, for this reason, collectibles such as Gold Medals, Stickers, and Backgrounds are nowhere to be found in Super Mode.

While the plot points remain the same between the two modes, the dialogue is completely different; the game goes as far as to include new intro scenes for every level. A lot of conversations are changed to include more characters, and more humorous dialogue, replacing most tips and tricks. In addition, the Super Mode reveals a lot of things normally absent in the regular mode. This includes:

Mission Mode is an extra mode unlocked once you have completed Normal Mode once. The mode has you playing special levels given to you, but rather than completing the level normally, there is a challenge involved; this can include clearing it in a certain amount of time, surviving for so long, collecting enough Clips, and more. In addition, 2 minigames, Sun Dash and Tank Dozer also appear in this mode. There are worlds similar to the main story, with each mode having 7 regular missions and one "boss" mission. For a full list of all the missions, see Danny's Adventure/Missions.

Versus Battle is a multiplayer mode available right from the start. Up to 4 players can connect via wireless in order to access this mode, and it is also playable with just one player and CPUs. The Versus Battle Mode is host to a couple of different minigames; them being Dash To The Finish, Tank Duel, and Monopoly Tower. In addition, there are special Team and Shuffle modes included as well.

Soundtrack is the final unlockable mode. It's first unlocked after beating Normal Mode where all songs in that mode are found here to listen too. Upon beating Super Mode, Super Mode exclusive music as well as original Mission music is found here. After participating in Versus Battle, original Versus Battle music is found, and after defeating Missions, special sounds are included. When everything is 100% completed and a file is perfect, you might even find some unheard tunes and voices...

Danny's Adventure is for the most part, a platformer. Danny goes through sidescrolling levels in an attempt to reach the Goal Flag at the end of each level. There are enemies in every level as well as collectibles: power ups in the forms of Super Bottles, special Gold Medallions, and Clips, the coin source and national money of the Golden Empire.

There are a few things that sets this game apart from other platformers, however. The first thing is the fact that Danny is almost never alone; Sammy (and later Anton and Kaine) are always with him, either as other human players or as a CPU. Players can perform special moves together in order to defeat a large amount of enemies quickly.

There are also shops in the World Maps, where players can buy things such as health, special in-level items, backgrounds, clothe items, and more. Most items use Clips but Backgrounds can be bought here using Gold Medallions. Backgrounds are sets of items; they include a menu wallpaper, a change of clothes for every character, and a random picture.

Danny also has a Bubble Storage. You might notice a menu of bubbles that you can open up during levels; this is where your items bought in shops are stored. You can also store health recovery and Power Bottles found in the levels in the Storage. If you're unhappy with your items, you can mix them to create something new.

Danny normally gains his powers through bottles. The powers of bottles can stack. The more of a certain bottle he collects in a row without disruption, the more skills he can use related to the powers. Once you've obtained 4 Bottles in a row, one can use the Super Attack of that bottle-however, upon using the Super Attack, your powers are taken away and you can only use the basic skill once more.

Of course, Danny is not left defenseless without a bottle. He also has some basic attacks that he can use, such as a punch on the ground and a Drill Stomp in the air. The main difference between the bottle powers and your standard attacks are that you can buy equipment that boosts the power of some moves: for example, a pair of Quick-Draw Gloves might increase how fast the execution of a punch is, while Sleek Cleats might increase the power of foot attacks at the cost of ending lag.

Power Bottles are the main power ups of the game. When collecting a Power Bottle, you gain a skill to use, and the more bottles you collect in a row, the more skills you can unlock. When you have 4 bottles, you can use the Super Skill of that bottle, but it reverts your skills back to if you had one bottle after use. All powers are kept until the player loses a life or a different bottle is used.

The sole exception is the Invinci Bottle, which acts more as an invincibility power up: while Danny necessarily doesn't become invincible, his defenses are raised significantly, and it can't be stacked like other bottles. He also has all four basic skills right away and his Super Skill is automatically used when the time limit of the bottle runs out.

Below is a table showing all the different bottles, their in-game descriptions, and their moves. 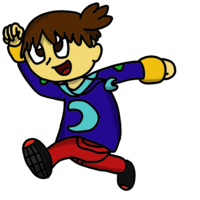 Danny, the main protagonist of the game.

Sammy, the secondary protagonist of the game.

Seam, the "main antagonist" for most of the game.
Add a photo to this gallery

Retrieved from "https://fantendo.fandom.com/wiki/Danny%27s_Adventure?oldid=2007884"
Community content is available under CC-BY-SA unless otherwise noted.