Start a Wiki
“Look on the bright side! If you're feeling at your worst... you have nowhere to go but better, right?”
— Danny, Danny's Adventure: Concord!


Danny is a young child who lives in the Golden Empire, and the main protagonist of the Danny's Adventure series. He works as a knight-in-training, constantly saving his townfolk and home from various dangers such as Orcus. Danny acts as the flagship character for GD Gaming Studios, as well as the first original character the company created.

Before Danny was born, his future dad ruled the rich Golden Empire. For unknown reasons, however, the ruler apparently left the kingdom and lost his role of king. Danny's mother was initially planned to rule as the queen, without a king beside her. Things began to change as another wealthy family stepped in and took over, giving Kaine the role of princess instead.

Ever since Danny was born, he had a true passion for exploration and adventure, said to be inherited from his lost father. The curious child would often run away from home and explore the kingdom on his lonesome. As he grew older and gained a sister in Sammy, these traits eventually began to fade away as he became stuck in the house often to watch over his smaller sibling.

At the age of 13, his adventuring spirit returned after crisis struck the Golden Empire. Hundreds of citizens were being "kidnapped" from the kingdom, with Seam being the eventual mastermind behind the scheme. After traveling out of the kingdom into unknown lands and saving the townsfolk from an extraterrestrial beast known as Orcus, Danny was invited to start training at the Golden Empire's Knight Academy. Although he initially refused to take care of Sammy, by the end of Danny's Adventure he eventually accepted.

Danny began to split home duties and training alongside Anton, a prime captain of the academy and one of Danny's companions during his first adventure. This allowed him to learn new techniques and fight larger threats. His first major mission as a knight would be months after his initial entrance, being sent as a peace ambassador to stop the F.R.O.S.T. tribe from invading the Golden Empire during the events of Danny's Adventure: Concord.

Danny is usually unbelievably optimistic, trying his best to keep a cheerful attitude and focusing on the good things in life. He believes that he doesn't need a reason to enjoy his time the same way he needs a reason to be upset. Despite this, Danny can have his attitude shift dramatically depending on the situation. When he is upset, he usually tends to be overdramatic and takes a while to cool down. When confused or tired, he tends to think before speaking and doesn't think of consequences.

One of Danny's defining traits, according to himself, is his sense of humor. Although he tries to keep things entertaining for his companions, they usually find his jokes to be hit-or-miss. Danny also tries to act as a natural leader to keep things in order, and often becomes peeved if his voice gets drowned out by others. He tries to strive in the spotlight and likes to believe that he can handle any situation, even if he knows that some things are out of his league.

Danny makes his first appearance in the first game of his series. After people start disappearing from the Golden Empire, he sets out on an adventure to stop whoever is causing the problem, alongside his sister Sammy. In this game, he is the main protagonist and playable character for first players, although after the game is beaten, players can choose to play as him or Sammy. His regular attacks deal more damage than other characters, but his jumps have lower overall height.

Danny makes a reappearance in the sequel of the original Danny's Adventure. Now a knight-in-training, Danny's first mission is being sent out as a peace ambassador of the Golden Empire, with the goal of preventing a nomadic tribe from invading his home. Danny's role is exactly the same as before, being the main playable character with more strength then the others at the cost of jump height. In this game, Danny can also wield the new Power Arm, a special weapon designed to further boost his arsenal.

Danny and Sammy are brother and sister, and have a very close relationship. However, this doesn't stop them from bickering and arguing over trivial subjects. Although Danny used to have regrets over constantly babying Sammy as a child, these feelings have mostly went away. In current times, they work together well as a team and often partner up to take on all sorts of tasks.

At first glance, Danny was not fond of Seam's acts. As the person who kidnapped the majority of the Golden Empire and held them hostage in his domain, Danny was immediately hostile towards the mage. Over time, however, the two slowly improved their relationship by sorting out the misunderstanding that Seam made. Danny has not heard of Seam since his first adventure, however.

Let's be honest... if there was a space-traveling beast that invaded your hometown and began to wreak havoc across the place and people you knew and loved, all because it thought that chaos is cute, would you like it? Is this really something I have to write out because it might not be immediately obvious? Come on, guys.

Danny seems to be relatively unaffected by the fact that Kaine stole his chance at becoming royalty. If anything, he seems to understand the pain that Kaine goes through trying to rule a country with overprotective guards and problematic parents. As a result, he usually isn't afraid to voice his thoughts and concerns with the town to her. It's rumored by some that Kaine may have a soft spot for Danny, but he doesn't seem to care much about the thought... probably.

Danny has been on good terms with Mitch for a long time. When adventuring as a child, he unknowingly came across the secret lab of the professor, and the two have frequently met since them. Many of Mitch's gadgets have been specifically designed for or tested on Danny, such as the Power Bottles and Power Arm. Despite this, Danny often shows valid concern for his friend due to near constantly being cramped up in his lab and experimenting with new gadgets.

Chelsea is Danny's closest friend. When Chelsea first moved in, it took some time before the majority of the empire began to trust her; Danny was an outlier in this regard. Ever since the very beginning, Danny has been trying to assist Chelsea in getting over her fears and gaining more confidence in herself, although sometimes his efforts may go too far.

Danny holds Anton in very high regards, having looked up to him as a teacher of sorts. This feeling becomes literal as Danny begins to be mentored by the captain, often dueling against him for training when they're not working on a common cause. He seems to be one of the few people that can tolerate his serious attitude most of the time.

Despite being a bit odded out by the sight of this weird merchant, Danny has since learned not to judge a book by its cover when meeting Alfonzo. His many wares have proven to be useful on multiple occasions, making Danny one of Alfonzo's best (and only) customers. Danny usually consults Alfonzo if there is a problem or roadblock that he doesn't know how to get around. Alfonzo's sense of humor is also appreciated by the young boy, and the two often make a hobby out of reading joke books together.

Danny as he appears in Danny's Adventure. (BETA) 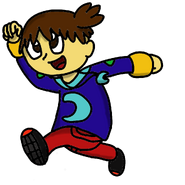 Danny as he appears in Danny's Adventure.

Danny as depicted by SI.
Add a photo to this gallery

Retrieved from "https://fantendo.fandom.com/wiki/Danny?oldid=2152067"
Community content is available under CC-BY-SA unless otherwise noted.