The DVDS is a handheld console that is supposed to compete with the, PlayStation 4. The main feature is to play games and movies that run on a disk. It also, can be plugged in to be played with a joystick. Unlike the real 3DS, the DVDS can't 1: Can't Be played 3D 2: Doesn't include Camera. 3:Can't download 3DS games, from the Cube shop. 4: Doesn't use amiibos. This software was rumored, to play VHS tapes, but has been debunked. The Internet application, has been improved to play any video plugin, (youtube, dailymotion,etc) and can download .exe files. It has been said that other things will be added like add homepages, add desktop wallpapers, and listen to music. Some people say this is "a ripoff of a real MS computer" while others say it's better than the "NEW 3DS", which it could be played on with real 3D mode. It could also play DS, Gameboy advance, and download handheld vitural console games. Theres also, a DVD mode where they code switch to the DVD in the console.

While the DS stylus can be used, it also uses the Fantendo Mouse. Fantendo, also said that Namco is making a third party joystick.

The camera option has been removed. But the DVDS sound option is back. Same as the DSI version, but one option is, to use the SD card, and put it on the computer. Mii maker returns, only some different things: Camera face option is removed, Can't save QR code, can now download Tomodachi life miis, and can't be added on the wii. It can be added on the Wii U and 3DS. Face Raiders and AR games, have sadly been removed. Flipnote studio 3 is a software that has the same features as Flipnote Studio. However with the black DVDS, it's only a demo. The full version, could have 3D programing, sound effects, with wavs, add models,(comes with, Mario, Toon Link, Kirby, Pikmin colored, Samus), record games, and send them online. The full version costs 100 points. Miiverse was removed. 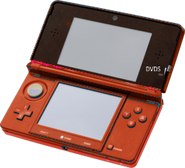 Flipnote Studio 3
Add a photo to this gallery
Retrieved from "https://fantendo.fandom.com/wiki/DVDS_(game_console)?oldid=2363174"
Community content is available under CC-BY-SA unless otherwise noted.