Please note: This page will be receiving a rewrite soon.

“Everyone has a dark side, even if they're clueless of its existence. The dark can be manipulated and twisted into something magical and exciting, we call that feeling Despair.”
— Tagline

DESPAIR is a murder mystery, visual novel adventure game developed by Spike Chunsoft and Illusion Works to be published by Illusion Works exclusively on the Pacifico. The game is heavily inspired by the franchise Danganronpa, but hosts some changes to help suit the game's image and to try and make it less of a carbon copy of that series. It features characters from the early Ziama Prime universe in a non-canon killing game where they must kill each other in order to guarantee their survival. The series takes place in an alternate universe from Ziama Prime or the New Fantendoverse, which allows for any strange possibilities to happen.

It has also been confirmed that numerous sequels, prequels and other video games relating to the franchise are quite possible, all of which will parody the Danganronpa franchise in game play. An alternate universe, appropriately called the "DESPAIRVERSE", is the umbrella term given to all titles existing in the franchise and universe.

The game's main theme song, "DESPAIR", was performed and composed by "MissPavalova", as a reworking of MACARON. The instrumental version of the song is also used as the main musical theme on the opening of the game. 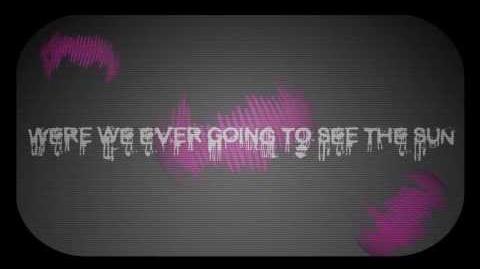 DESPAIR plays exactly like main series titles in the Danganronpa franchise, those being "Danganronpa 1: Trigger Happy Havoc", "Danganronpa 2: Goodbye Despair" and "New Danganronpa V3: Everyone's New Semester of Killing". Naturally, changes have been made to the overall formula to suit the brief of this series, and to make the game more suspenseful and fast paced than previous instalments.

The game is split into multiple chapters, which vary in length. Every chapter has two main phases, "Daily Life", in which the player is free to explore around the various areas and interact with characters to reveal new information which may prove helpful later on in the game, however the further into the game you survive the more areas become available to you. You can examine items in the world that you may find curious, which can also give you new information. When given free time in the game, you can also do events with other characters which can help you learn new information about them or just generally.

However, there is also "Deadly Life", which is activated upon a corpse being discovered. Players must search around the area to try and find clues to ultimately determine who out of the group has committed the murder.

There are also some changes to this formula which are especially apparent in DESPAIR. The main difference is that now there are twenty six people involved in the game, and they aren't all students, instead of the previous fifteen or sixteen.

For example, there are a lot more pieces of evidence which you can collect in the game to help determine the killer, some may be planted by the killer, or may be tampered with too, which adds some new twists in the game that is less linear.

Unknown to the characters, the rule of everyone being killed upon selecting the wrong killer has been removed, which means that there can be multiple candidates in the game that can be pinned as the killer in different chapters, however each chapter has a main killer candidate, which is the usual path the player will take, but they aren't forced to if they wish. However, for the sake of a continuous story, in the first play through of the game, there will only be one person who can be targeted as the murderer.

Another major mechanic in this game is the ability to formulate your own lies which you may use in the game as well during the class trials. However, while these can add a lot to the game, they can also come back to haunt you if used incorrectly. For example, if you try to use a lie of yours as evidence, someone else may contradict you which can make you more untrustworthy to other people in the game, and it could even go as far as pointing to you as the killer of that particular murder.

The distrust meter is also a new feature, which is inspired by the beta version of Danganronpa, "DISTRUST". When you look at character biographies in the game menu, you can see a new meter which shows the trust you and that character share. If it is high, it is likely they will believe what you say, and if low, they may disbelieve what you say. Some students may also help you with lying in the game if you plan beforehand, which can drastically change up the game.

DESPAIR, unlike the main Danganronpa titles, uses traditional red blood instead of the pink blood the franchise is known for. Due to censorship not being an issue, this change was possible and implemented into the game. Due to being on a home console as opposed to a handheld device, the game received a higher quality polish with assets, backgrounds, and other art looking clearer in a higher definition. The designs of the characters also received a more updated and high definitive look.

The story of the game will feature the characters as they participate in the killing game against their will. It is undecided whether the game will be written in full script or just in chapter synopsis'.

In DESPAIR, there are twenty six characters included in the killing game. You can find all their pages and master class information here. These icons will be redesigned soon. 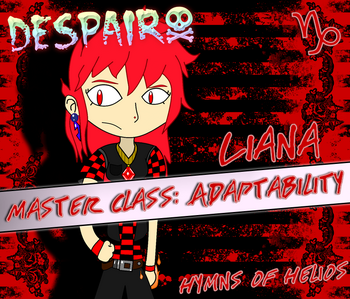 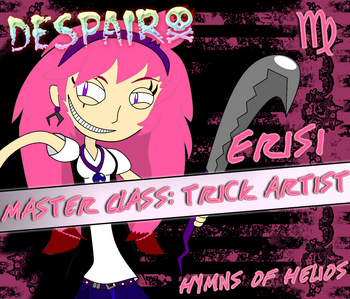 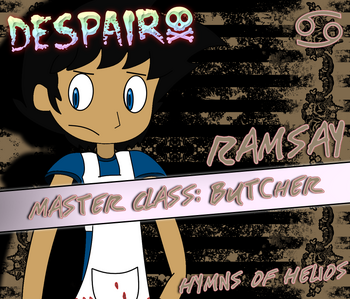 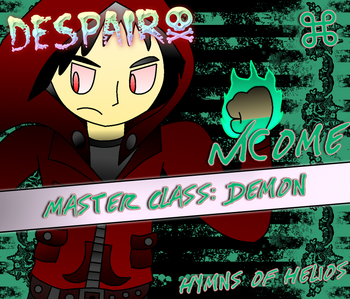 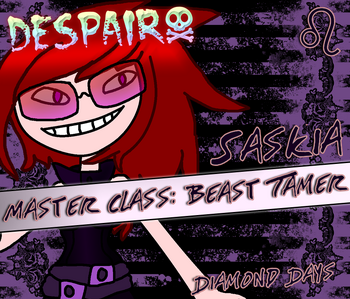 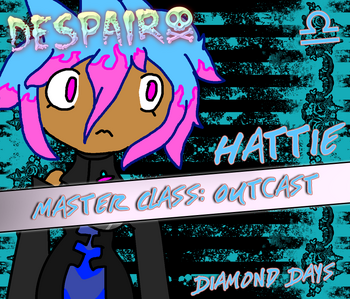 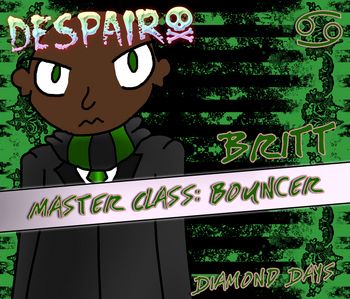 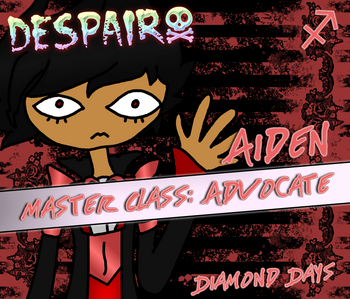 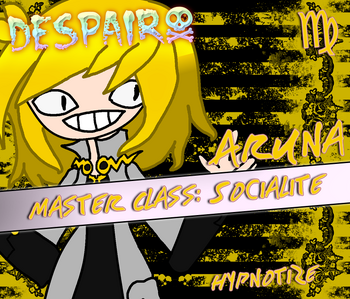 DESPAIR has been positively received so far. It was created on July 06, 2016, and has yet to be completed.

Japanese Logo
Add a photo to this gallery

Retrieved from "https://fantendo.fandom.com/wiki/DESPAIR?oldid=3346817"
Community content is available under CC-BY-SA unless otherwise noted.