Cuccos are a recurring animal species in the Legend of Zelda series. These small domesticated birds are usually found in flocks in peaceful places such as villages, ranches, and castles. Despite the name "Cucco", they are not related to the real cuckoo and are based on normal chickens. In fact, it could be said that "Cucco" is simply just the Hylian word for chicken.

Cuccos are usually docile and domestic in nature, and are considered quite humorous. However, if Link attacks a Cucco multiple times, the Cucco will become enraged and starts crowing very loudly to call its flock, and together they attack him by flying down from various directions and pecking him to death. Once attacked by a flock of Cuccos, there is no way for Link to protect himself unless he manages to escape in time by fleeing from the vicinity. If he manages to climb on Epona, he will also be safe from their attack. Ironically, in this state of fury, they can be even more dangerous than most real enemies in the games. It is not advisable to, unless near an exit to the area, attack any Cucco in the first place.

Cuccos can also be grabbed by the talons and held overhead, and if Link jumps off a height while holding it, the Cucco's flapping will let him gently float toward the ground. Cuccos are also adept swimmers, highly unusual for a chicken-like bird.

An exception to the mob of attacking Cuccos is in The Legend of Zelda: Twilight Princess where, if Link attacks a Cucco, the player can control the Cucco rather than Link for ten seconds, though this feature does not serve any real purpose in the game.

Cuccos are usually white in color, but in games like The Legend of Zelda: The Minish Cap, Cuccos with yellow feathers can be seen. These Cuccos escape a few seconds after being grabbed. In Twilight Princess, Cuccos come in the shades of blue-grey, brown; however, most are white. Later in the game, Rusl lets Link use a Golden Cucco in order for Link to cross the Deep Gorge and arrive safely to the Sacred Grove. There is also one known blue Cucco, which is named Cojiro and appears in The Legend of Zelda: Ocarina of Time.

There is also another variety of Cucco first bred in Ocarina of Time, known as the Pocket Cucco. This Cucco has the same appearance as regular white Cuccos, but is compact and can be carried in Link's inventory.

Cuccos appear as items in the Super Smash Bros. series, first debuting in Super Smash Bros. for Nintendo 3DS / Wii U. They can be picked up and thrown at other players. Should a Cucco hit a player after being tossed, a swarm of Cuccos will come to attack the player who was hit. Cuccos also appear in Smash Run with their appearance from A Link to the Past, and will call in a swarm of Cuccos to attack any player who attacks them. These Cuccos, unlike the ones that appear as items, cannot be picked up and merely serve as obstacles.

Cuccos appear as enemies in N-Stars, becoming enraged after being hit by the player but otherwise being completely docile otherwise. When attacked, they send other Cuccos after the player similar to their appearance in Super Smash Bros.

A larger Cucco also appears as a playable character, having a vastly simplified moveset compared to the other characters but is massively powerful. It has poor speed and defense. This giant Cucco can be unlocked by feeding a giant Cucco on the map some food items. 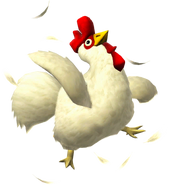 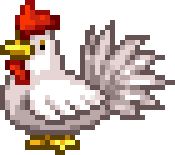 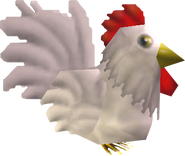 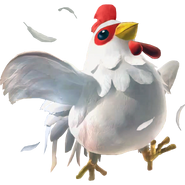 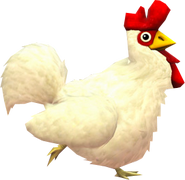 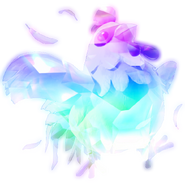 Crystal Cucco
Add a photo to this gallery

Retrieved from "https://fantendo.fandom.com/wiki/Cucco?oldid=3324885"
Community content is available under CC-BY-SA unless otherwise noted.