Start a Wiki
“You better watch out because Meta-Form is more than you think! ”
— Cubey, Meta-Form (Game)


Cubey is Meta-Form's partner. He first appeared in Meta-Form (Game) along with Metaf. He gives advice to him and will transform into a shield or a bullet shell in order to protect Meta-Form. He eventually become able to fight on his own at the followed-up games.

He is helpful but overtly cautious. He doesn't want to give up Meta-Form and his other friends, but when things gets extremely dangerous, he will gets nervous, but will often put up courage. He tend to be calm, but if insulted or harassed, he will warn the harasser. If they keep insulting/harassing him or if the bully does it against Cubey's friends, he will become protective, and only resort attacking them if they proved to be too violent to listen.

He prefers to think before leaping into action, which is what did helped Meta-Form to control his anger and become more adult since Meta-Form: Common Force. He will however retaliate if someone is attacking him out of sudden.

While the two gets along very well and are best friends, they do bicker over their strategy difference and the way they handles the situations. That is to say, their bickering are often minor and when a grave situation rises, they put the feud aside and solve that situation.

He highly trust this company because they created him and Metaf. However, his reason to avoid getting inside this factory is because some kind of a criminal lives there.

He does not like this robot does to his large amount of crimes he is doing. He however tend to be neutral with his minions, knowing that they serves him out of fellowship, instead of dishonesty. KiloBot tend to resent him for being Meta-Form's partner, and often tend to jokingly mock him for copying his cubic style.

He acknowledge that they are misled in the beginning, and when they understand that they are supposed to be "Guardians of Nadian City", Cubey forgives them but he warns them to not join someone evil again. He however had shortly disliked Firisk for attempting to kill him and Meta-Form the moment they taken him down the first time, but Firisk redeems himself by saving them from the Ultraminator.

He don't know who is Meta-Ette in the beginning does to his absence, but now Meta-Form told him who it is, he can at least trust her. However, he dislike her disobeying personality and he tend to teach her how she supposed to live, but she can becomes to hot-headed to listen at time. 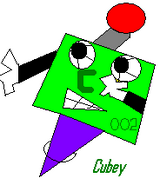 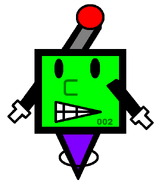 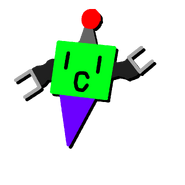 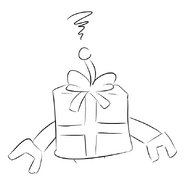 Chirstmas Art by AgentMuffin (t∣b∣c)
Add a photo to this gallery
Retrieved from "https://fantendo.fandom.com/wiki/Cubey?oldid=2690712"
Community content is available under CC-BY-SA unless otherwise noted.