Crystalum is an alien that is made up of 25 orbs, contained within a crystallized shell.

Crystalum appears as the boss of World 13, the NoShadow Planet in Cursed Enigma. He later reappears in the sequel, where his fight is resurrected by Robo.

Crystalum appears as the 3rd boss in the game. He resides in the Creature Base, where he guards the Callous Ruby. The player must use the Storm Hammer to crack his outer shell, then his orbs will all disperse. The player must then destroy all 25 orbs to defeat him. After 15 seconds, the remaining orbs will form together and he will restore his shell. The player must repeat this until all 25 orbs are destroyed.

Crystalum reappears in the sequel, where he must be fought again, in exactly the same way. He appears in Level 10, the Sky Temple, where the player must fight all the bosses from Cursed Enigma, who were resurrected by Robo. 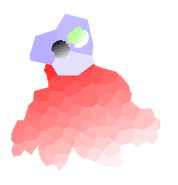 Cursed Enigma
Add a photo to this gallery
Retrieved from "https://fantendo.fandom.com/wiki/Crystalum?oldid=659960"
Community content is available under CC-BY-SA unless otherwise noted.