Cryo the Hedgehog is a hedgehog hailing from Mobius, gifted with ice abilities. Cryo primarily focuses on battling instead of speed, much like his rival Propane the Hedgehog. He utilizes his ice powers to freeze his opponents or create ice trails.

Cryo the Hedgehog is a black hedgehog with blue stripes running down his quills and limbs. He looks strikingly similar to Sonic the Hedgehog in terms of body. He has gray eyes and pale, gray complexion. He wears gray and cyan shoes.

Cryo the Hedgehog is a oddly cold and distant hedgehog when not in battle, where he seems to be more in his element. It is suggested that he suffers from some kind of memory trauma and can't remember much, aside from Propane the Hedgehog which he has a fierce rivalry with. It is also implied that he was created through artificial means and his body is considered technically dead as his heart no longer circulates blood throughout the system.

Cryo the Hedgehog is generally a mediocre fighter that was given the elemental ability to generate ice out of his hands and feet. While generally speedy, he pales in comparison to Sonic or even Shadow the Hedgehog. He seems to be a better fighter than Propane, although he comments that it's just his ability that gives him the upper hand as opposed to his actual fighting style. 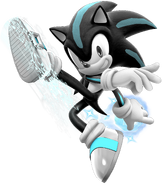