Start a Wiki
The Creator of Life is a simulation-world creating game by Clover Entertainment. It is an attempt to branch out from focusing solely on destruction. Here, you can create a world and fill it with life. Basically, you are God. The game will be released on November 3, 2012, for PC, Xbox 360, PS3, and Wii U.

The game takes all of the things that made SimCity so great and expands on them. Instead of just creating a single city, you can create an ENTIRE world. First you have to create the planet, give it water, carve the terrain, and place oxygen into it. As the game goes on, you can fill the planet with life. You can choose what kind of life fills it. It could be a made-up species, or it could be a planet with humans. It can also be a planet inhabited entirely by animals. Watch as the creatures do cool things. Humans for example, will build large cities where they can (depending on the terrain). Watch as their cities grow, and watch them go to their jobs, drive in cars, and watch buildings be constructed. Animals, on the other hand, are also just as fun to watch. Watch as lions go after gazelle to eat them. You can also determine a certain creature's fate, like in The Sims 3. You can choose when a person will get married, have kids, and you can also choose how they die, or when they are born.

The graphics are so lifelike, like in Cities XL. You can save up to 20 planets in one Solar System file. Watch as the human civilization evolves and thrives. Watch animals mate and have children. It's just a really cool game. And if you get bored, you can also use Simcity's signature disaster mode, where you can summon a disaster of your choice to come in and destroy a city or cause terror in animal's homes. There are 15 disasters: Giant Monsters, Tornadoes, Earthquakes, Tsunamis, Terrorists, Meteor Showers, and firestorms. You can also choose a person's traits and personality, which will determine their outcome. 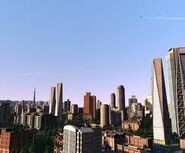 Animals hanging out in the wild.

A view of the world.

A view of the planet your species inhabit.

Disaster Mode, with the monster destroying a city.
Add a photo to this gallery 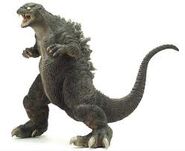 Tornado
Add a photo to this gallery
Retrieved from "https://fantendo.fandom.com/wiki/Creator_of_Life?oldid=1785318"
Community content is available under CC-BY-SA unless otherwise noted.