Start a Wiki
“Watch out for these penguin-looking guys who throw balls at me. If I get hit, I act really strange.”
— Wario, Wario Land II
Crazy Wario (also known as Drunk Wario) is one of Wario's Reactions in the Wario Land series. It was introduced in Wario Land II and reappeared in Wario Land 3.

When hit by a penguin's ball (or in the japanese version of Wario Land II, a tankard of beer), Wario becomes intoxicated and stumbles around, very hard to control. Wario could protect himself by belching at baddies to defeat him, however this ability was removed in Wario Land 3, merely being a hindrance to the player.

This form goes under the new name of Poisoned Wario in Wario Land: Hunt For The Ring, taking on a new appearance as well. Wario appears purple with stars surrounding his head. The form acts identical to past appearances. 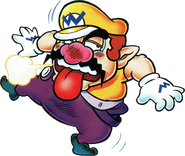 Poisoned Wario from Wario Land: Hunt For The Ring
Add a photo to this gallery
Retrieved from "https://fantendo.fandom.com/wiki/Crazy_Wario?oldid=2674722"
Community content is available under CC-BY-SA unless otherwise noted.