Crazy Hand is a recurring character in the Super Smash Bros. series. He is Master Hand's left hand counterpart introduced in Super Smash Bros. Melee, and has appeared in every game since. While Master Hand's movements are slow and calm, Crazy Hand, as his name would imply, moves around in erratic ways. Apart from being a left hand, Crazy Hand is otherwise identical in appearance to Master Hand, but is more chaotic in general, befitting his impulsive and destructive nature. Like Master Hand, he is encountered in Final Destination and usually supports Master Hand during the final battle, although specific conditions often have to be met to fight him. When he is with Master Hand, the two can perform several cooperative attacks.

Crazy Hand makes his debut in Super Smash Bros. Melee as a secret boss. He is encountered at the end of Classic Mode like Master Hand, and to fight him, the player must play on Normal or higher, and reach Master Hand in under five minutes and 50 seconds without using a continue. If these conditions are met, Crazy Hand will appear in the middle of the battle once Master Hand's health has been halved. He also appears alongside Master Hand in Event 50: Final Destination Match, where both must be defeated.

Crazy Hand's fighting style is similar to Master Hand's, though he is fought on the left side of Final Destination rather than the right. He has similar attacks, such as grabbing, poking, slapping, and slamming on the ground, though these attacks are noticeably more damaging, and sometimes inflict additional effects on the player. Crazy Hand also has a few attacks of his own, such as flailing on the ground, crawling along the stage as if he were a spider, and releasing several bombs from his fingertips that explode on impact. Additionally, if both hands are alive, they can use a few attacks together, such as putting the player to sleep before smashing their fists together, repeatedly clapping together, and Crazy Hand punching across the stage and being caught by Master Hand. Like Master Hand, Crazy Hand's health and attack power scales with the difficulty, with some attacks being One-Hit KOs on higher difficulties.

Crazy Hand's trophy can be attained by clearing Adventure Mode on Hard or Very Hard without using continues.

"Where the Master Hand loves to create, its alter ego is impulsive and destructive, consumed with that hollow feeling which comes from destroying your own creations. The Crazy Hand appears when a player clears obstacles quickly and the Master Hand's power is low. You have only one chance to defeat the Crazy Hand."

Crazy Hand reprises his role in Super Smash Bros. Brawl as a boss. Special conditions once again must be met for him to appear in Classic Mode, where the final stage must be reached in 9 minutes or less with the difficulty set to Hard or higher. This time though, he appears alongside Master Hand at the start of the fight rather than when Master Hand's HP is halved. Crazy Hand is also one of the bosses battled in Boss Battles, which is the only time in the game where he is battled alone and without special requirements. Further, Crazy Hand is also the only boss not required to defeat in order to unlock Boss Battles.

Crazy Hand's tactics are similar to how they were in Melee, sharing attacks with Master Hand although being noticeably more dangerous. He has several attacks he can perform together with Master Hand as well. Notably, this is the first game to give Crazy Hand's voice a different pitch than Master Hand's, making him sound more hysterical as a result.

Crazy Hand's Trophy can be attained by clearing Classic Mode on Intense. Strangely, his Trophy is listed in the Subspace Emissary category, despite being completely absent in that mode.

Crazy Hand returns in Super Smash Bros. for Nintendo 3DS / Wii U, once again appearing as a boss in Classic Mode, though encountering him is a bit easier than it was previously. He is fought alongside Master Hand at the end of Classic Mode if the intensity is 3.0 or higher. He has several new attacks in this game compared to his previous appearances, such as opening a dimensional rift to suck in the player and damage them, or place spear-like pillars of energy in the ground that damages the player on contact. He also has more attacks he can use with Master Hand's aid, such as him throwing balls of energy at Crazy Hand for him to bounce back onto the stage, and Crazy Hand scraping his fingers across the stage, followed by Master Hand throwing an uppercut. Unlike previous games, Master Hand and Crazy Hand now share a single pool of HP. On intensity 5.1 or higher, Master Hand will turn into Master Core if they take enough damage, with Crazy Hand disappearing from the battle afterward.

In Super Smash Bros. for Wii U, Crazy Hand also has his own mode called Crazy Orders. It requires 5000 Gold or a Crazy Orders Pass to play, where players take on consecutive difficult challenges issued by Crazy Hand for prizes. Unlike Master Orders, the prizes are not given to the player immediately, as they must battle Crazy Hand to obtain them. They can keep playing challenges to earn more prizes, but if they lose at all, they won't receive any and will need to pay in order to play again. During the fight with Crazy Hand, he can release treasure chests that contain more prizes as he gets damaged. If enough challenges are played, Master Hand appears as well.

Crazy Hand appears in Super Smash Bros. Ultimate, once more as a boss. He is again encountered in Classic Mode, but is either fought alone or alongside Master Hand, depending on the character selected. Crazy Hand can now move around Final Destination and face either side, like Master Hand could in the original Super Smash Bros., and he has several new attacks at his disposal, including manifesting an eye from his finger that fires a laser that paralyzes the player, creating five blue fireballs that circle around him, and digging into the ground with his fingers like a shovel. He is also much stronger overall compared to previous games. To compensate, Crazy Hand can now be stunned if he takes enough damage, leaving him vulnerable to attacks for a short time.

Crazy Hand also appears in World of Light after Galeem is initially defeated. Dharkon, its darkness counterpart, will appear, with an army of Crazy Hands that will eradicate the army of Master Hands Galeem had. Crazy Hand is battled three times in the Dark Realm, one guarding each of the three pathways into the subareas, and is battled twice more during the final sequence. In the end, Master Hand and Crazy Hand are freed from their control, and open a dimensional rift for Master Hand to enter and defeat various light and dark puppet fighters.

Crazy Hand makes a surprise appearance as a boss in Kirby & the Amazing Mirror, being encountered alongside Master Hand as the boss of the ninth level, Candy Constellation. He uses the same attacks as Master Hand, from punching Kirby to slamming on the ground with his fist, but the two hands also use several other attacks in conjunction with each other. Once both are defeated, Kirby obtains the eighth and final Mirror Shard. 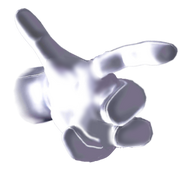 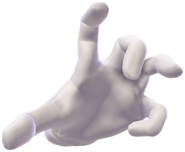 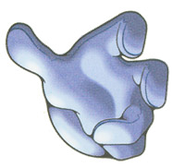