Crash Bandicoot is a bandicoot and the protagonist of the Crash Bandicoot series of games. Originally a simple Eastern Barred Bandicoot, Crash was captured by Dr. Neo Cortex and turned into the subject of his mad experiments, along with several other marsupials. With the help of a machine called the Evolvo-Ray, the maniacal Cortex genetically modified Crash into a smart and anthropomorphic creature.

Crash is very adventurous and likes to explore his surroundings as he deals with the local wildlife (usually by greeting them with a swift spin attack). He has a tendency for breaking things, especially crates, which is how he got his name. When not out on an adventure, Crash is laid-back and enjoys basking in the warm sun, eating Wumpa fruit and sleeping (while snoring loudly). He is almost always in a good mood and is generally silly, but he's not much of a talker, usually blurting out "Woah!" or other words in style similar to Mario and Link. Despite his somewhat reckless behavior, Crash doesn't go looking for trouble, as it usually ends up finding him instead. In fact, he would probably get along just fine with his enemies if they didn't try to destroy him all the time.

Crash has a younger sister named Coco Bandicoot, as well as a brother named Crunch, whom he befriended after Cortex had initially created him to take him down. His primary love interest was Tawna, a female bandicoot who received the same mutation treatment as him. Rescuing her from Cortex's clutches was Crash's main incentive for his very first adventure, but despite his success, she did not stay with him for long.

Crash appears in Disturbed Silhouettes, with a huge redesign. He not only wears very technological clothes, but has a headpiece and for the first time, his tail is clearly visible. His tail has a tan tip, slightly obscured in the photo to the right due to the fire effect.

Crash is expected to be a playable character in PlayStation All-Stars: Ultimate Battle. He has eight palette swaps. 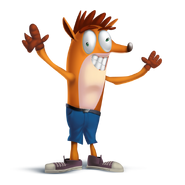 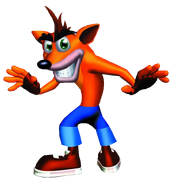 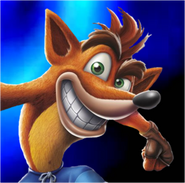 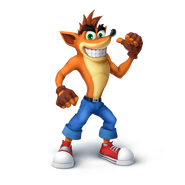 Add a photo to this gallery
Retrieved from "https://fantendo.fandom.com/wiki/Crash_Bandicoot?oldid=3365004"
Community content is available under CC-BY-SA unless otherwise noted.