View source
“Mario? Oh you mean that guy that made me cranky. Why would I join HIS team?”
— Cranky Kong, Super Mario MHL

Cranky Kong is an elderly Kong and character in the Donkey Kong series of games. It's stated by Rareware (the developers of Donkey Kong Country) that he is intended to be the Original DK, while the current Donkey Kong is either the son of an adult version of DK Jr., or DK Jr. himself. Cranky is the grandfather (or father) of Donkey Kong and the husband of Wrinkly Kong.

Cranky appears in Donkey Kong Continent, reprising his role from Donkey Kong 64 by making potions. His lab appears in every level, and the Kongs can pay Banana Coins to buy new move-teaching potions. Cranky is also the one who constructs most of Funky Kong's machines.

Cranky Kong is the "damsel in distress" in The Original Donkey Kong. In it, he is kidnapped by himself from the past, and Donkey Kong and Diddy Kong set out to save him. His past self is also one of the four playable characters.

Cranky Kong appears in the game Donkey Kong Knockout as a guide. He shows you how to play the game in the tutorial level which starts when you begin the game for the first time. After this he is also seen at the side of the ring in boxing matches as a coach for the kongs.

A younger version of Cranky appears as a Non playable character in the wii platformer Super Mario Bros: Diaper Duty. He is seen fighting against Prince K. Rool to rescue Baby Donkey Kong and Baby Funky but he is defeated.

Cranky Kong appears as a playable character in the multiplayer Wii racing game Donkey Kong Racing. He appears as part of the Kong category.

Cranky Kong is a player on the Donkey Kong Wilds team on the multiplayer Wii sports game Mario Rugby League. He is a skillful character with good strength and poor speed. His special skill is to pull out a shield and prevent tackling.

Cranky Kong appears as a starting racer in Mario Kart: V² Circuit. He is a mediumweight with a large size. He has an poor speed, poor acceleration, slightly above good handling and perfect traction.

“I had to [come]. Who else is gonna add some flavor to this boring, poorly-written excuse for a story?”
— Legend of the Chaos Star Part 11

Cranky first appeared in the fourth chapter, where he (reluctantly) agreed to attend Mario and Luigi's surprise birthday party at Princess Peach's castle. However, the moment they arrived, they found that it was no longer there, as it had been hijacked, uprooted, and taken into the sky by Bowser. After expressing what a "waste of time" it was to have come all that way, Cranky and the other Kongs mysteriously vanished (thanks to the Pixl, Polywarp), and found themselves at Merluvlee's house in Shooting Star Summit.

While there, Merluvlee, Polywarp, and the other two Pixls, Starlight and Purity, elaborated on the current situation. They went on to explain that a void has appeared in the sky, thanks to the power of the Chaos Star, and that it could only be stopped by collecting the eight Purity Stars, which were stolen by Dimentia and Dimention. Not wanting the universe to get destroyed, and feeling as if he was the only saving grace to a "rubbish story" like SolarBlaze's, Cranky agreed to help track down the Purity Stars alongside the other heroes. He decided to tag along with Donkey Kong, Diddy Kong, Toad, Yoshi, and Birdo over at Iggy Koopa's castle, where one of the stars was being kept. From there, they all fought the deranged Koopaling, defeated him, and obtained the third Purity Star.

In the twelfth chapter, Cranky ended up running into Pauline again for the first time in years. Despite his claim that he knows everything there is to know about the story, her identity is the one thing he's puzzled by. He did, however, say that he couldn't shake the feeling that they've met somewhere before. Pauline, on the other hand, did not recognize Cranky at all, most likely because of how much he's aged since their last encounter. 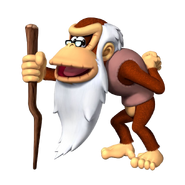 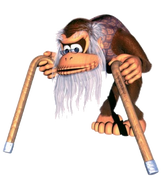 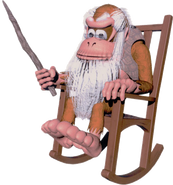 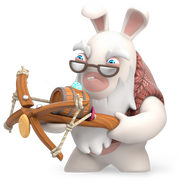