Crabrawler is a crustacean Pokémon resembling a crab. Most of its shell is purple with blue and yellow accents. It has two long, yellow antennae over its eyes. One blue eyelid is usually half-closed, giving it the appearance of a black eye. The purple shell covering its body appears to be made of three parts: two plain plates covering the shoulders and part of the chest and one plate covered in blue stripes across its underside. A large portion of its yellow body is visible down the center of its chest and a tiny spot is visible in the center of its back. Crabrawler has three pairs of legs. The two rear pairs are smaller with yellow joints and blue tips. The foremost pair of legs has large blue pincers resembling boxing gloves.

A competitive Pokémon that hates to lose, Crabrawler strives to achieve not only a high social standing, but a physically higher position as well. It can be found clinging to buildings or even tall people, and will punch anyone who attempts to remove it from its perch. This Pokémon’s large claws also serve as protection for its face and belly while it closes in on opponents. While it is capable of splitting tree trunks, it usually punches trees to knock down ripe berries. Many Crabrawler will gather around a tree to compete for the ripe berries. Occasionally, it will lose its pincers in a fight. 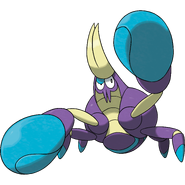 Official Art
Add a photo to this gallery
Retrieved from "https://fantendo.fandom.com/wiki/Crabrawler?oldid=3203247"
Community content is available under CC-BY-SA unless otherwise noted.