The Cosmic Spirit is a character introduced in Super Mario Galaxy 2. The character is introduced to be used as a feature like the Super Guide Block from New Super Mario Bros. Wii, helping the players get through levels (after they've failed 8 times). She looks similar to Rosalina, and seems to be related to Cosmic Mario and Cosmic Luigi, as she is made out of the same kind of matter.

Like the other Cosmic characters, the Cosmic Spirit is of an unknown gender, possibly having no gender. However, due to the appearance of the character, the character is referred to as a female.

The Cosmic Spirit allegedly plays a much larger role in this upcoming game, as Nintendo has confirmed her to be the main antagonist.

The Cosmic Spirit appears as a host in the DLC board Rainbow Space Village. 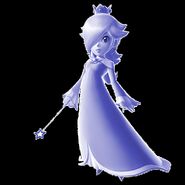 Super Mario Galaxy: Universal Expedition
Add a photo to this gallery
Retrieved from "https://fantendo.fandom.com/wiki/Cosmic_Spirit?oldid=3208699"
Community content is available under CC-BY-SA unless otherwise noted.